So, today I went to the Sun Theatre in Yarraville to see the Apollo 11 moon landing in real time, apart from a bit of footage of the craft taking off. It was interesting to see all those men - yes, they were all men, as far as I could see - at their desks, doing the work of getting the ship going. The CAPCOM was astronaut Bruce McCandless, who didn’t actually go to space for some time afterwards, but did some exciting things when he did. There’s a video of him flying around in a chair thing(MMU) in space, on YouTube. But we also saw the young Charlie Duke, who was in Melbourne earlier this year.

So, the ship got to the moon, the LM landed. We watched it all happening - well, the approach to the moon from the Eagle’s window and  their getting out of the LM, anyway. There were the historic moments - “The Eagle has landed,” , “One small step...” and “Magnificent desolation”, to applause from the audience, and then the astronauts got to work, collecting samples and setting up equipment for experiments. They talked about how they managed their walking, what the surface felt like and so on. They set up a camera to film themselves as they worked.

As people were taking photos of the screen and nobody said we couldn’t, I did the same, and here is one blurry shot. You can’t see it from this, but the light and shading on the left side of the LM looked to me like a portrait of Lenin. Once seen, I couldn’t unsee it! 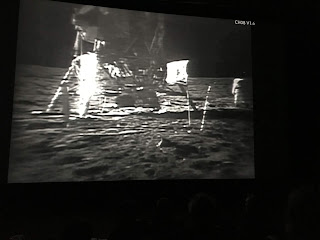 So, most of it was work related, and I became aware, after a while, that those on Earth were taking great care that Buzz and Neil didn’t run out of air. There were regular comments on “portable life support systems” and the astronauts were called back up to the craft before they could run out. You probably also know that they landed with just enough fuel to get them back to the Columbia.

Apparently Nixon had two speeches prepared, one for their success, one in case they got killed. Think about it: blasting off into space on top of a huge bomb! Scary!

Unfortunately I have a tendency to doze off in the dark and I missed the planting of the flag. Well, it was history, after all.

I believe this was also done at some other centres in Australia, at the same time.

Some years ago, I wrote an Apollo 11 story for the Ford Street anthology Trust Me! The hero was a boy who missed the moon landing, due to a bully and the need to help his grandfather out. If you’re interested, the anthology is still available on line, in print or ebook.

I did a lot of research for it, in 1969 newspapers, not only the articles about the actual moon landing, but also what was on TV, the theatre and the movies, how much groceries cost, letters to the newspapers... I didn’t use it all, but it made me feel comfortable in the era. There was even an article in which the journalist described his personal experience, so that I knew what the weather was like in  Melbourne on that day! (It was a fine, sunny winter day).

So, how did you celebrate today’s Moon Day?

Posted by Sue Bursztynski at 12:18 AM

It was one of humanity’s greatest achievements. I was born in 1967 so I was too young to have memories of it. I have always been a space exploration enthusiast and of course, Apollo 11 is the ultimate moment in human in human space flight. Let us hope that humans get back to the moon soon.

Hi Brian! It is indeed a very exciting moment! I suspect that the next destination will be Mars. In fact t, Michael Collins was interviewed a while ago, and asked if he would like to go back to the moon. He said no, but he’d go to Mars tomorrow.

Hi Sue - fascinating post ... I know I'll be picking up bits of information I'd no idea about - the event passed me by. But it's so interesting reading about it - I still missed the tv today! I know I'll check it out sometime! I have to say the thought of going to Mars is a planet too far!!

But love your details and the way you wrote your story about the moon and the historical achievement 50 years ago ... cheers Hilary

Thanks, Hilary! If you’re interested, I’d be willing to bet that there will be repeat videos on the BBC web site. With luck, someone else will go to Mars on our behalf...😏

We've been inundated here with moon stuff (because so much of it happened here). We didn't do anything specifically though.

Perhaps grab a copy of The Dish, then - such a feel-good movie!