Night Of The Notables!

Tuesday night I went to Night Of The Notables, at which this year’s Children’s Book Council of Australia long list, the Notables, was announced. It was an enjoyable evening, beginning with catching up with fellow writers and library staff over drinks and nibbles, then into the theatre to hear the long listed books for 2019 announced. I can see I have a lot of reading to do! 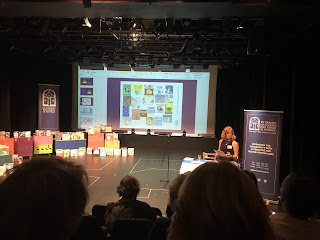 I was pleased to see some by people I know personally on the list. For example, Felice Arena’s Fearless Frederic, which I have read and enjoyed, was there, though Felice wasn’t. I had the pleasure of DMing him on Twitter afterwards - he hadn’t known and was thrilled. Last year that book made it to the YABBA shortlist, though Andy Griffiths won as usual. Kids adore Andy, but they also love other authors, so it’s nice he could make it to two lists. With luck, he may make it to the short list as well - fingers crossed!

Wendy Orr’s wonderful Swallow’s Dance made it and it will be a gross injustice if it doesn’t reach the short list(being announced on March 26).

I was sitting next to the amazing Carole Wilkinson, whose terrific Inheritance didn’t make it, but whose daughter Lily’s After The Lights Went Out did. I haven’t read that yet, but probably should. Lili has stopped writing romantic comedies, alas, but romantic comedies don’t get on CBCA lists, whereas serious stuff does. Andy Griffiths may have won the last sixteen YABBAs, but will never get on the CBCA lists. Paul Jennings only made the short list for a semi-autobiographical novel, never for his funny books.

I noticed with interest and pleasure that this year the CBCA judges are split into groups to judge different sections. A couple of years ago they had a survey of interested parties and one bit asked for suggestions and I suggested that they might find the judging easier if they did it like the Aurealis Awards which split into groups instead of trying to read everything as the CBCA judges had apparently been doing, according to one judge I heard speak, who said she had read several hundred books. Even the individual sections had to read about 150 books each this year!

We also heard from three guest speakers, Alex Rance(footballer who has written a picture book, Tiger’s Roar, with a new one about to come out, who admits he isn’t much of a reader), comedian Jo Stanley, whose wtiting was spurred by her childhood love of Anne Of Green Gables and the wonderful Fiona Wood, who, among other things, is the co-author of Take Three Girls and has done an Ardoch Writer In Residence like me. 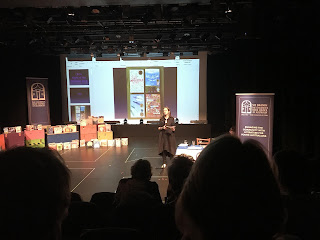 I won’t try to give you the entire long list, which includes about 80 books, but here is a link to the CBCA’s Reading Time web site. Happy reading! See you again when the short list is announced.

Posted by Sue Bursztynski at 2:15 PM

I LOVED Anne of Green Gables.
I wonder how it would read now, 55 years later.

I still read the entire Anne series every few years. I love it as much now as I did when I discovered it as a child. Totally stands the test of time.

It sounds like it was a great night. I agree, seeing these lists makes one want to read more. If only there was unlimited time for reading.

Hi Brian! Yes, it would be nice to be able to read as much as you want! Having ebooks means I can slip my iPad out and read whatever I want when I have a few moments, on public transport and such. Almost as good!

Hi AJ! Nice to know. My sister was a huge fan of the series as a child. I think she still has affection for it.