Last Sunday I visited the State Library of Victoria’s Village Roadshow Theatrette to attend the launch of the revamped Insideadog web site, a site aimed at teenagers, on books and reading. This site has been around for years, but it was felt it was time to update it. The teens who made up the advisory committee were quite rude about the old one - and I have to admit, the updated version is much easier and more use friendly. Here it is!

It allows the young users to have their own blog page and comment on each other’s reviews. That was not the case with the old site. Oh, and no adults allowed! Well, you can read it, but you can’t join.

There were two sessions. In the first one, some of the kids who had helped re-design the site were on a panel with author Lili Wilkinson, who had designed the original site. She described how she had managed to get the grant to set it up, including the name of the web site(“Outside of a dog, a book is a man’s best friend. Inside a dog, it’s too dark to read.” Groucho Marx). She said that was the only time the grants people laughed. Anyway, they got the money. Lili said that in those days, there were no social media sites, none of the things that would have made the web site more attractive. The kids discussed what they felt they needed.

The next session was with author Melissa Keil and the rest of the kids. It wasn’t about the web site, but about what they expected in a book. The kids were very bright and articulate - mostly Year 11 and 12. 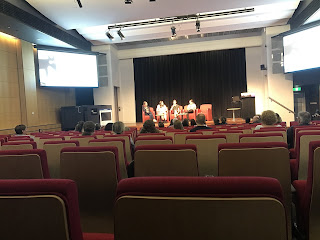 An interesting session in all, though I would have liked to see something about the site itself other than being told “it needed a revamp, and we revamped it.”  There was a projector they could have used to do a wander around the site, but didn’t. However, I had my iPad with me and checked out the site on my own.

After it was over, I had a chat with Lili, whom I know. She is working on a new novel, no title yet, a thriller. Her mother, the wonderful Carole Wilkinson, had taken out little Banjo to enjoy the Lunar New Year celebrations in the city. (Carole tweeted about it later).

Paul Collins was there, but had to leave early for another commitment he had. Still, nice to see a familiar face.

I chatted for a while with the mother of one of those kids who had been on stage. Her daughter wanted a bit more time with her friends, whom she was worried she might not see again. The lady told me that her daughter was stressed because a wonderful teacher librarian had left the school for a better job elsewhere and had been replaced with one who was nowhere near as good - and then the entire library had been cut back to almost nothing. When the girl and her schoolfriend came to join the mother they confirmed it, along with their frustration, as passionate readers. The thing is, this is an expensive private school, where you expect a huge staff and lots of good things happening as they do when you have a decent budget. They are paying their fees to have that sort of stuff!

I suggested that this was something the fee-paying parents might wish to address.

But who would have thought it? An expensive private school cutting back its library!
Posted by Sue Bursztynski at 7:51 PM

Well, I would comment but I have no words

Teenagers are ambivalent about books, aren't they? On one hand it is much easier for them to see films, read book summaries and find reviews on desk tops, iPads, mobile telephones and even wrist watches. On the other hand, they know they will disappoint their teachers and parents if they cannot read, write and spell well. The bright and articulate teens you mentioned must have been special :)

Special, indeed, but not as different as you might expect. They reminded me of my book club kids, who were amazing, but even those who chose not to join might be enthusiastic readers, and I have had plenty who borrowed regularly. When I visited the school at the end of last year, they had missed me!

I went to an expensive private school in high school and I understand the cutbacks a lot. I joined the book club there and although our library was gorgeous (it is about 100+ years old), it lacked a lot of "newer" books. To me, I felt as if our library was more for show rather than to be a place to explore new books. I understand the lack of funding to our library department. My school was very old and we were using chalkboards still. We took so much funding from my 4 years in high school to upgrade all the science equipment, computers, and smart boards. The library received less funding those 4 years and we had to let one of our librarians go as well.

That’s sad, Elle! I guess that when a principal is showing around the parents of prospective students, the glitzy equipment is what they think will impress them most. And if the library was for show, they would have been impressed with that too. The fact that they got rid of ONE of the librarians, though, says there was more than one. I was sole TL and also had to teach classes. My annual budget was $3500.

I loved the library at my primary school. The librarian was a bit of an ogre, but he only mattered when we had library lesson. When I was in high school the library was burnt down by an arsonist. Devastating.

Goodness, you had bad luck with your school libraries, didn’t you? Hopefully, the burnt-down library was replaced with insurance money? A friend of mine told me about a library at his school that had been burned down and replaced. The problem was, they bought all new books, but then they all went out of date at the same time!