On Rereading The Dark Is Rising 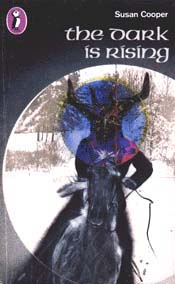 There is a discussion happening on Twitter right now, using the hashtags #TheDarkIsRising and #The DarkIsReading. There are actually some people in the discussion who are discovering this wonderful Susan Cooper novel for the first time, but there are others, like myself, who have read it many times and are reading it yet again. Many of the readers are living in the northern hemisphere, where the weather is freezing right now and it just seems a good thing to read, due to its ambience. The story is set over several days from Midwinter Eve to Twelfth Night.

In some ways, it's a bit like Alan Garner's work, but the odd thing is, I re-read The Weirdstone Of Brisingamen a while back and I didn't enjoy it as much as I remembered, though I think I may go back and read it again, and the sequel, The Moon Of Gomrath, to prepare myself for the adult sequel written in recent years by Alan Garner. Like Susan Cooper, though, he manages to get the atmosphere of the place he is writing about. The place - Alderly Edge - works better for me than the characters, Colin and Susan.

Actually, it's more like the first novel, Over Sea, Under Stone than any of the others in this series. Kids go to stay in a gorgeous rural place and pick up an item the Dark wants. The bad guys go after them, while they solve the mystery of the item. They also meet people who aren't human, who help them, while they are helping the magical beings against the bad guys. But in Weirdstone, the parents aren't with them. In Over Sea, Under Stone, the motehr of the children, Simon, Barney and Jane, is with them, except not interfering. She is there to paint, thank you very much! The interesting thing is that their adult mentor, Merriman Lyon(whom they eventually work out is probably Merlin), knew their mother as a child, which is why they call him Uncle Merry. I wonder if she had some adventures with him, but perhaps was made to forget? It might make an interesting prequel.

That novel was set in Cornwall. The Dark Is Rising, which can be read more or less stand-alone, as can the first novel, is set in Buckinghamshire, not far from Windsor Castle. The young hero, Will Stanton, turns eleven on Midwinter Eve and finds out he is the last of the Old Ones, a bunch of people who have been fighting the Dark on behalf of the Light for centuries. Merriman Lyon - who, yes, is Merlin, though it's not confirmed until a later book - is his mentor. Merriman, it seems, is capable of making mistakes and he made a bad one about a hundred years ago, leading to a betrayal and making Will's life harder. But if that hadn't happened, there would be a lot less novel!

Will is the seventh son of a seventh son, which is an important thing in folklore. Terry Pratchett used it in his Discworld novels, except it was the eight son of an eighth son. The eighth son becomes a wizard and the reason why they are not encouraged to marry is that they might have eight sons of their own and that youngest will be a powerful Sourcerer, which is not a good thing. That happened in Sourcery.

The thing I found a bit odd about The Dark Is Rising is that we're told Will is the first Old One to be born in about five hundred years. So - weren't there any other seventh sons of seventh sons born in that time?  And does being a seventh son make you an Old One? What about the women - there are female Old Ones. Do you have to be the seventh whatever to be an Old One? And what about the Old Ones in this novel? We know Merriman has been around for centuries, but does this mean that all the other Old Ones have also been around for centuries? One of them is a local farmer. Another is a farmhand, who has a wife, and his son is a smith - one who can travel through time and be there in the fourteenth century when Will arrives, but are they all hundreds of years old? And given that they're more or less immortal, why do they age? And they do. Maybe they just age more slowly than we do, and maybe they're not actually immortal, just long-lived.

Or maybe it's simply a glitch? Even the best of writers can make them.

Anyway, it's still powerful stuff, the kind of "beautiful writing" that readers of adult fiction are always going on about, the kind you read and feel deeply moved by. The characters are ones you can care about. And when the Wild Hunt arrives on a night of rain and storm, it's wonderful!

I think I must visit Buckinghamshire next time I go to the U.K.


And here's something I have only realised on this reading. I think some of the scenes in my novel Wolfborn were inspired by this. Not plagiarised, but inspired. Go read it - or reread it - and you'll see what I mean. I have a scene in a forge, though the encounter is between my hero, Etienne, and the more-or-less likeable Queen of Faerie, Nemetona, instead of Cooper's evil Dark Rider. Nemetona returns later in the novel and helps Etienne.

And there's the scene where a storm arrives just when Etienne needs to save his lord from being stuck in wolf shape for the rest of his life. It's a dramatic scene with lots of rain and thunder and lightning and the Wild Hunt, though in my novel the Huntsman is the god Cernunnos. Some of his followers are Faerie, others are the dead, including a character who was murdered earlier in the novel. The prey is - well, let's say he deserves it. Read it without too many spoilers!

But I hadn't realised that I'd used elements of The Dark Is Rising! Forgive me, Susan Cooper! Look, you can't do drama with Wild Hunts on a fine night with the stars twinkling. It just wouldn't work.

I think this one is the best of the series, but I actually found I liked the third one, Greenwitch, better than on my first reading. That was a pleasant surprise.

The premise is that before the final battle between the Dark and the Light,  six items need to be found. The first and third novels feature the Drew children. In the fourth, The Grey King, and the fifth, Silver On The Tree,  they meet Will and work with him and a boy who turns out to be - no, read it, if you haven't. Spoilers, sweetie! The first three are more or less children's books. By The Grey King, they're turning into YA. Sound familiar?

They were written a long time ago. I remember the final book came out while I was in my first job, and I lent the teacher-librarian my copy, because she hadn't seen it yet(I was a full-time classroom teacher then). It was a very popular series in my school.

If you accept that no one is going to be using a mobile phone or going on-line in any of them - heck, Will's family don't even bother to have a TV, though they could - you have a good chance of enjoying this book and the rest of the series.

They are available in ebook, so why not buy them? Or find them in your local library.

If you have read these books, what do you think?

Posted by Sue Bursztynski at 1:03 AM