As I write this, I have had to return to my old campus, which is about to be pulled down. I really didn't want to come back and see the remains of my poor library. Yes, there will be a lovely new library at the new school and it won't have asbestos in it, but it won't be my library.

But someone had to come and direct the removalists which stuff had to be taken to our other campus and when I arrived, their truck had broken down and who knows how long it will be before it arrives? And I'm supposed to be supervising students in a movie showing this afternoon. At best, I might just make it on time to set up at lunchtime. Apparently the room concerned has a projector and a screen, but no computer, and I have no laptop. Well, I do, but I have not brought it in to work in years. It's just too heavy to lug and my iPad did fine for rolls and marking and even class prep. Someone will lend me a laptop to use, if necessary. And you had to supply the movie. I brought in three - Star Wars ANH, Back To The Future and Raiders Of The Lost Ark. My friend Jasna has also offered me Snow White And The Huntsman. Whether I make it on time is another matter.

I did do one good thing - a silly student who hadn't been paying attention had turned up at the old campus. He didn't have a myki card and I think I left my silly-student spares at home, so I took him into the school and organised something for him.  \ Jasna was there, packing stuff into her van and agreed to take him.

But some good things have happened in the last few days. Look at this. 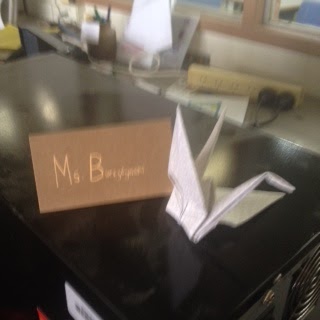 A student whom I only knew a little, but who came with us to the Melbourne Writers' Festival made me this paper crane and gave me that little card/note which read as follows:


"Thank you for being such a wonderful librarian, although I haven't been taught by you I can tell your a wonderful teacher. Thank you for allowing me to come along to meet Moris Glasmsn as well as staying with the book club at times. Wishing you great happiness and joy with this crane by your side."

I've left in the spelling errors, because it was her message, but I'm sure you can work it out.

In the end, whatever hassles I've had, I'm glad to have had a job working with people. I've worked in an office, though it was an office that dealt with people's needs(Social Security, now Centrelink) and I don't regret it, because that was where I met a dear friend I still see, and it gave me the chance to compare. And I remember how when people rang to tell us to stop their late parents' pensions, I always expressed sympathy, and one man wrote to say thank you. And then there was the time when I managed to get the bank to cough up a pensioner's money. I was so happy to be able to ring her back and tell her to go get her money.

But I am glad I didn't continue in that job - this one has been much more rewarding.

Posted by Sue Bursztynski at 2:41 PM

Hi Sue - it sounds rewarding ... for all the frustrations of being a teacher - lots of rewards. Hope the day went well ... cheers Hilary

Thanks, Hilary! Yes, it can be both frustrating and rewarding, but I would far rather look after my students and see them grow into happy young men and women than do paperwork in an office. And I've done both. I know how I feel about it.

Sorry to hear of the sadness of this last end of term, Sue, and that you are having to leave the changing library for a new adventure. You've obviously been a good friend (and wise reading guide) to many of the young students there which is a most valuable thing. Take care of yourself during this mixed time.

Thanks, Penny! Tomorrow is my very last day and I STILL have to go back for a short visit, to help celebrate the office lady, who missed our final party and is to be given a gift.

The kids know I care about them, even those who don't read much.

I didn't realise you were thinking of retiring. Sounds like you've got some well planned and well earned time off to rest and think about writing. Good luck!

Thanks, Lan! Not just thinking about it, doing it! I’ve been ch3cking out my market guides and today plan to go to the library.

Is there such a thing as market guides? I should go to more of them but I always come back with a lot of things I don't need and then feel bad for it later on! I should take a trip to the library too but need to read the ones I have already on loan!

Yes, plenty on line, just Google your particular interest. But as you self publish they may not be of much interest to you. They are about how you can submit stuff to publishers and hopefully be paid for them. ;) I subscribe to a children’s/ya one and there is a lady who runs a free service on her blog for submitting to children’s magazines.

I go to the library because if I try writing much at home, I get distracted. Plus they have free wifi and I can research.