If you haven't seen it, it's a collection of articles by our best known writers on the subject of something that is going on now, an attempt to destroy our local publishing industry.  Don't believe me?

Here's a quote by Richard Flanagan, author of Booker-winning novel Narrow Road To The Deep North, from the Productivity Commission's report. 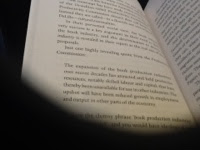 Okay, a bit blurry, but what it says is that the local publishing industry is wasting all those people who could be better employed in other industries, and is thus doing horrible things to the economy. Huh? It's successful, it's employing lots of people(25,000 at this stage) who are paying taxes, unlike some billionaires, buying things, building homes, thus employing more people, and this is wrong? I don't get it.

When you think of all those manufacturing industries moved offshore because this government and the ones before it let them go, what do they have against an industry they don't subsidise and don't support, which is still doing nicely, here and overseas? Because they don't subsidise it, apart from a few grants via the Australia Council and even those have been slashed by the current government.

"Productivity" basically means "do more with less." In this case, it's "do nothing. Overseas books are better and we can get the readers onside by telling them they will get cheaper books."

In case you have no idea what I'm talking about, here it is. We currently have a law in place that prevents us from having huge piles of overseas books dumped on us. The deal is that the publisher has to make the books available in an Australian edition within fourteen days of overseas release. Otherwise, the booksellers could buy huge lots of cheap editions from the US or Britain - cheaper for them, anyway - and some of those books are by our local authors, who would get paid less in royalties  for the overseas editions of their own books.  That's while these still exist; overseas publishers don't want to take our books till they've proved  themselves here.

I remember, early in my writing career, when a friend went to the UK to see overseas publishers, who just weren't interested in anything from the colonies. Looks like that time might come back.

When they did this to the music industry here some years ago, it wreaked havoc. Our musicians have never recovered.

Books over there, by the way, have gone up in price, not down.

And for what? Even if you do resent paying more for your own stories, you can always buy online.

But this isn't all. They want to scrap the current copyright system, for something they call "fair use". Fair to whom? "Fair use" in this country means that you can photocopy 10% or one chapter of a book, whichever is more, to use in study. The new U.S. version of "fair use" means something else altogether.

If this happens, the current copyright term of seventy years after the author's death would be reduced to fifteen or twenty years after publication. After that? If you've visited this blog before, you'll know how I feel about piracy. But it would no longer be piracy, it would be legal.

For those writers who make their living from this, royalties are their pension, their superannuation, and something to leave to their families. Now? The politicians are sneering at the very idea. How DARE these writers want to leave an income to their children!

What if someone walked into Mr Turnbull's mansion and ordered him to vacate it because he'd had his fifteen years in it, time to give it away to anyone who wanted it? Hey, why not divide it into flats for young families? How would he react to that?

What if you walked into a furniture workshop and told the carpenter that they shouldn't expect to keep the work of their hands and certainly not expect to leave the business to their children? The furniture should be given away to anyone who walked in?

Just because writing is made up of ideas you can't touch or hold doesn't mean it should be free to anyone who wants to steal it.

And so I'm asking you, if you read this, if you care about Australian stories, to do something.

If you live here, write to your Federal MP. Write to your State Senator. Tell them how you feel and hint, if you feel strongly enough about it, that you're thinking carefully about your next vote.

Here is a link to help you.

While you're there, sign the petition if you haven't done so already.

If you don't live here but still care, and want stories from Down Under in your life, publicise the issue. Feel free to embarrass our politicians. Tweet this post or look in Twitter under #saveozstories and retweet.

And - can you comment below to let me know if you've done any of the above? I get many hits on my posts, but rarely a comment and I never know whether they've had an effect.

Posted by Sue Bursztynski at 3:32 AM

Holy cow! That's a lot of proposed changes and scary possibilities. But I guess all governments (and people) are tightening their belts and the art and literature are the first to go. :(

They would be if the government was supporting the arts in the first place. The little support they were giving through grants has already been cut way back. So, not about belt tightening - you can only tighten your belt if you're wearing one. There is no reason at all to do it, except to destroy the local creative arts industry. (See above, what the report actually says!). There are still lending rights, but I guess that may be next to go. Even if it doesn't, there will be less paid out, with local publishing decimated.

In this country, sport is the state religion. They spent far more sending athletes to the Olympics than they would/will ever spend on the arts. When the athletes come home they'll get parades and celebrations in their honour. And those of them who attended th Australian Institute of Sport don't even have student debt to repay. That's the priority here.