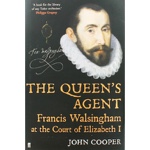 I've had this since Wednesday and am about 100 pages in already. I picked it up when in Dymock's in the city, shopping for a gift voucher for the only one of my Book Club students to have attended meetings regularly since Year 7, now graduating from our campus as a big Year 10 girl.
Book shops are a danger zone for me. I almost always leave with a carry bag with a new reading treat in it. And wonder where I'm going to put the thing. I do donate all my review books to the school library and have recently offered some of my adult does fix books to Continuum for raffles and trivia nights, but it's not enough.
Still. I ended up buying this book and having a cold drink and a croissant at Ganache, a chocolate shop/cafe opposite the bookshop, reading eagerly. The lady at the counter at Dymock's said, "Ooh, you're going to have a nice surprise! It's only $8.95!" That was a nice surprise - the sticker said nearly three times more!
Enjoying so far. I have read quite a lot of stuff about this era, usually from the viewpoint of Gloriana herself(including a couple of YA novels/docudramas by Jane Caro), but not usually from the viewpoint of those who served her. This is a bio of Francis Walsingham, best known as her spymaster. He was that indeed, and very good at his job, but he had a lot of other responsibilities, which kept him up from first thing in the morning(in bed, yet!) till late at night. He got sick from it all.
There's no doubt that Elizabeth was a great monarch and had an amazing life and things must have been very hard for her as a woman ruler - a king could have married an overseas princess or even, sometimes, a subject, as her father had, but that wasn't an option for her. Marry a foreigner and your people automatically assume he's going to take over(and may well be right about that) and most of the foreign princes were Catholics anyway. Marry a subject and the mutterings will be that he isn't good enough for you. And chances are that he will also try to take over. The only man she would have thought she could trust was Robert Dudley and after what happened to his wife, they just couldn't marry. There would always have been mutterings that he'd killed her to marry Elizabeth. (IMO, if he had done that, he would have been a fool and from what we know of him, Dudley was no fool.)
So, yes, she had a hard time of it and handled it well.
But it must had been really hard to be workíng for her! As a lady in waiting you would likely be screamed at and cuffed when Her Majesty was angry about something that had nothing to do with you. And if you were one of the loyal men in her service - and she did manage to choose some very loyal servants - you'd work and work till you dropped on something she had required of you and she might change her mind. And Elizabeth did, quite a lot, and she wasn't always right.
So, I'm reading the bit where she was considering marrying the Duke of Alencon, and the headaches this gave Walsingham. Fascinating reading!
Posted by Sue Bursztynski at 5:15 PM

I haven't read historicals in years, but I like docudramas when they come on TV. I always wonder if they have things right or not, whether it's the "truth." I guess we'll never know. Yay for your new and cheaper than expected book and for the snack at the Ganache (love the name!).

Thanks for dropping by my blog. I like your idea of a celebration - having high tea at the Windsor Hotel. It sounds absolutely delicious!!

Hi, Lexa! Jane Caro is an Australian social commentator, but has written two YA books about Elizabeth I, Just A Girl and Just A Queen. They're written as novels, but because of the fact that she has to get through a long lifetime and reign, they have more the feel of docudrama than novels. I'm enjoying the second one more than the first, but the kids who have read them responded with "Meh!" Possibly they might have worked better focusing on one small part of the Queen's reign than trying to get through the lot.

If you're ever in Melbourne I'll take you to Ganache. A very pleasant place to go for chocolate and tea or coffee! And they run chocolate making courses and chocolate history tours.

The Windsor is wonderful, but on the brink of being closed down due to problems between the owner and the planning arm of the government. It has been around for about a hundred years! :-(