Yesterday I received an inquiry from Chuck Whelan, who introduces himself below. I do receive quite a few requests for promo from authors and artists, but Chuck is a fellow fan of Graeme Base, so who could resist inviting him to talk about his work? I must admit, while I'm familiar with the Where's Wally type of books and some that are similar to this picture book, the idea of having a story is not all that common. I remember The Eleventh Hour, which was an elaborate picture book with a mystery attached(who stole the birthday cake?) so it's nice to know someone else is having a go at it.

I'm very much in favour of Kickstarter projects. It's how Christmas Press began and look how they're doing these days. If you'd like to support Chuck's project, the links are below, but first read his post and drool over the lovely samples from his book...

Without further ado - take it away, Chuck! 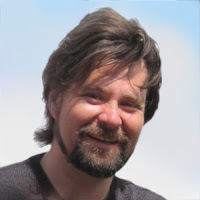 Hi, I’m Chuck Whelon, a cartoonist and children’s book author. Sue’s invited me to write this guest post to tell you about why I’m running a Kickstarter for my latest book

I’ve been working as an illustrator, off and on, since the early 1990s. My first job out of college was working at a book production company in the UK, where I was born and raised. There, I worked on a lot of language-teaching materials and other course-books for large publishing houses such as Macmillan, Heinemann and the BBC. It was a small place, but I got to do a lot of illustration, and also had to muck in and help with editorial and design duties. An assignment came up to work in the USA and, for some reason, no-one else wanted it. So, at 25 I jumped up and left for San Francisco, California, where I’ve lived ever since.

Much of the work I do comes through my agency, Beehive Illustration [http://www.beehiveillustration.co.uk]. Through them I got to work on some samples for a proposed Where’s Wally? spin-off series. It never came into being, but it led to me working on some other search-and-find titles for Buster Books in the UK. The first was called Where’s the Penguin?  and it was followed up by Where’s Santa? and The Great Fairy Tale Search. These have all been published internationally and in many languages (my favorite editions are the Korean ones, which are very luxurious!). I’ve also done a lot of maze and puzzle books for Dover Publications here in the US, including a large series of What to Doodle? books.

Now, you may have noticed that all those books have a question mark in the title, which is a little odd, but I am particularly fond of to working on puzzles and games. I’ve also illustrated a whole bunch of games for Minion Games [http://whelon.com/boardgames/]. I even designed a game myself called “Legitimacy: The game of Royal Bastards” [http://www.legitimacygame.com]. I’m also the author of a long-running, semi-autobigraphical, comic-fantasy webcomic called “Pewfell” and the cartoonist for Goodman Games’ Dungeon Crawl Classic RPG.

So, you’re probably getting an idea of the sort of things I like to create, and what led me to make Wizard Pickles. Wizard Pickles is fantasy-themed puzzle adventure book. It consists of 12 double page illustrations, filled not only with search activities, but also a wide variety of different kinds of picture puzzles, such as mazes, logic problems and codes. As much as I love straight search books like Where’s Waldo? I always want something a little more from them. I wanted to write something that had an actual story to it and a greater variety of puzzles.

There are a very few books of this type out there, one of the most popular being Graeme Base’s excellent The Eleventh Hour, which expertly showed how such a thing could be done. It’s definitely been a big inspiration. As a kid I loved Kit Williams’ Masquerade (impossible to solve) and his book without a name (The puzzle was to find out the title — which I proudly managed to do — Let me know if you need any hints!!).

Anyway, I was very sure about what I wanted to do with Wizard Pickles, so I set about writing it. That was the tough part. It was a balancing act between having an interesting story with actual characters and making each page be an interesting puzzle. I did a lot of back and forth on that, I can tell you! I was noodling around with it for a year or two, but eventually I had an outline and rough book dummy that I was happy with, and not a million miles from my initial concepts. I then showed the dummy around to get some feedback. Perhaps the most influential person to critique it was David Saylor, the creative director at Scholastic, during a local SCBWI event. He was very positive about it, but his advice was to to simplify the plot. A lot! Well, that was hard to hear, but I managed to do it, and in the end I didn’t have to gut it too much. There was a whole sub-plot about a Golden Pickling Spoon that was completely unnecessary, and the book was much better for it. So thanks for that, David!

Now, the manuscript was in pretty good shape, but I knew the book was still going to be a tough sell without the art. Then I heard about Patreon.com which was a new site where people can sponsor artists they like. It’s a bit like Kickstarter, but it’s on more of an ongoing basis. I put the word out, and managed to find a few people interested enough to want to back the project there (http://www.patreon.com/cartoon) - I ended up getting enough backers to pay me $200 per completed page. Not a lot, considering the work involved, but just enough to give me the motivation to keep working on the book in between my other assignments. After a few months, the book was done!

Now came the bit I was really dreading — shopping the book around to publishers. I didn’t want to offer it to Dover, as although they pay well and are great to work with, they always want all the rights to everything and never pay royalties. My agent showed it round to a number of people, including Buster Books (who had published my other search books), and I sent it to the couple of publishers I could find who might be interested and were actually open to unsolicited submissions. I even tried a few literary agents I had been referred to. Everywhere I got the same answer: “We love it, but it’s not what we typically publish and we don’t know how to market it”. They all encouraged me to keep showing it around but, after about a year of this, I decided it was time for plan B.

Plan B was always going to be Kickstarter.

I have had success on Kickstarter with my webcomic “Pewfell”, and several of the games I’ve illustrated for Minion were funded there. With Wizard Pickles my goal was to make something new and original, that hadn’t been seen before. It was the book in my head that I just had to get out. It’s understandable that marketing people, with budgets to worry about, do not want to take a chance on something with no proven track record. But I truly believe in the book, and Kickstarter is the perfect place to try out something new and different.

So now the project is up and running and we’ll see how it does. You can check it out here:

It runs until Sept 17th.

If all goes well, I’ll next move into the printing and distribution phase. For this I will be using Lightning Source/IngramSpark. I’ve used them for many years for my graphic novel collections, and their hardbacks are excellent quality and look lovely. Plus they have a great distribution network that get the print and eBook versions into all the big online retailers (e.g. Amazon & Barnes & Noble), and even gives you a shot at retail stores… if you can get the margins down enough. That’s tough, but still, the per-book royalty is just about as good as what a traditional publisher would pay. They have printing hubs in the USA, Australia, Europe, and the UK, so you have great international reach. A successful Kickstarter easily covers the setup costs, which are relatively small and certainly a lot less than a full-on print run. Of course if the Kickstarter does REALLY well, offset printing may still be a possibility, but with Lightning Source I can set a relatively low initial funding goal and go from there.

The biggest challenge with going this route is getting visibility, which is why I’m so grateful to Sue for giving me this opportunity to tell you my story here on The Great Raven!

If you’d like to know more, I’m very happy to answer questions. There are endless articles online about how to run a Kickstarter or self-publish a book. It’s a route I’d only recommend if there’s a particular dream project that you want to get off the ground. It’s a lot of work to do properly and you have to have your ducks in a row. Also, I only like to go to Kickstarter once the project is complete and ready to print. Going earlier and asking for more cash might be better from a business point-of-view - i.e. test the market before you do the work. But really, if it’s something you believe in and you’re going to do anyway, then I say just do it!