So, I've had five sessions at the Melbourne Writers' Festival this year, which is five more than last year. It would have been more than five if I'd had the energy to go out on Tuesday evening to the Alice In Wonderland anniversary celebration. It's still winter, cold, wet and after a full day's work and a staff meeting, I really didn't feel like trying to find a place I'd never been.

But five sessions were good, three of them free! Of the two paid sessions, I think the Shaun Tan panel was the better. I've long been an admirer of his work and encountering the French artist Kitty Crowther was great. The historical fantasy session was a disappointment, I'm sorry to say. It should have occurred to me that for historical fantasy, someone like Kate Forsyth or Margo Lanagan or Juliet Marillier, for example, would have been the best. I'd never heard of either of the speakers and, though I'm only too happy to discover newbies, neither of them had written anything that grabbed me. One novel, though it might have been mildly interesting, featured bestiality, with the author not being asked to elaborate, and the other was, effectively, slash fiction, judging by the blurb online, and slash fiction has always left me cold, as has hurt/comfort, which is often a part of slash fiction. Just a personal thing, not the author's fault. I might have been more interested if the questions involved had asked them to talk about their stories as well as their writing techniques.

The free session last Sunday, on Modern Mythologies, was very entertaining, and I bought both books as ebooks(so no signing for me).

Today I attended two free sessions and I thoroughly enjoyed both.

The first one was an interview with Sophie Hannah by Jane Sullivan(a well known journo). Sophie Hannah is a well-known crime writer who has, in the last year, had published a new Hercule Poirot novel, The Monogram Murders. He's the only Christie character because, as she pointed out, it would have been just a bit much to try to get not only Poirot right, but also the right voice for Hastings. I can see that. I haven't read the book yet because I hadn't read all the originals, though several, and wondered if I should, but I downloaded it during the session. What the heck. Sophie Hannah was very entertaining, a lively speaker with a delightful sense of humour. Although she spoke casually about her parents as if they were just Fred and Maureen Bloggs, and her father's collection of cricket books which he didn't read, and her mother makíng her cringe at parent teacher night, her father was a big name university academic who lectured in politics and wrote a lot of books, and her mother is Adele Geras, a famous children's writer who blogs regularly on the History Girls website and boasted about her daughter's gig when she got it. Apparently, her agent happened to mention that she would be great to write a new Christie novel when he was at the publishers about something else and the very next day, the publisher was chatting with Christie's grandson who was remarking that it might be about time the estate allowed a continuation novel to be written...

The second session was Meg Mundell interviewing Mike Jones(never heard of him, but I bet I will!) and Kelly Link, an American horror writer and editor(I did a panel with her at a Continuum) on the theme of modern Gothic. Mike said that because he mostly does work for TV his writing methods are very different from those if the average novelist. You do everything as a team. So he's used some of this in his fiction. Kelly works with Holly Black and Cassandra Clare, and they act as each other's first editors. She was kind enough to refer to Australian Gothic writers such as Gary Crew, whose books she read when she was working at a children's bookshop, Margo Lanagn and, for some reason, Paul Jennings. (Huh? Over the top, yes, but GOTHIC? The definition must be broader than I thought) 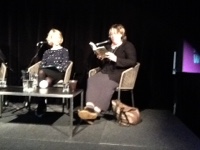 There is a session about the PhryneFisher TV series this afternoon, but I'm not planning to stick around. I really must get on with my neglected house cleaning once I finish lunch at Young and Jackson's.

In all, I've been quite pleased with this year's festival. There could have been a bit more spec fic, but there was some, and I was very impressed with how many high quality free events there were.
Wonder what will be on next year?
Posted by Sue Bursztynski at 8:54 PM

I really should get to the writer's festival one year. It's too bad its right in the middle of winter when I least want to leave the house! Glad you had a pleasant experience.

It's certainly hard on those winter evenings, but this was during the day and the sun was out. :-) Perhaps next year...