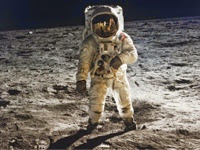 If you haven't seen this pic,
you've been living under a rock!

This isn't really a book-related post, but as I've said before, I came to love science fiction because of the "sensawunda" thing. I dreamed of going to the moon from early days, played "moon-landing" with my friends and loved Star Trek from the first episode I saw. (As it happens, I even know what Trek episode was on the week of the moon landing, because I read the TV guide in the microfilm newspapers  at the State Library when researching for my short story "Countdown To Apollo 11". The episode was "The Enterprise Incident". There was no Dr Who, as it was off for a while.

This week is the 45th anniversary of Apollo 11. It's rather sad that all that excitement and wonder should have ended with the US space shuttles having to be retired and nothing being done for the moment, at least nothing immediate.

Of the three astronauts who went to the moon, my favourite is Michael Collins, the one who didn't actually step on to the moon and was fine with that. He said that thousands would have given a lot to be in his place and that, as far as he was concerned, it was about flying and he had the best job of any pilot, ever!

He produced a number of books that were not ghost written - he said so and I believe him. His autobiography Carrying The Fire, has that true sensawunda you get in the best SF and yet was for real. I used that and his history of the space program while researching my own book, Star Walkers: Explorers Of The Unknown. Star Walkers sold out years ago and wasn't reprinted, so if you want to read it, you'll have to get it on eBay or ABE Books, but I used a lot of the information by and about him to help me.

Buzz Aldrin has at least one novel with his name on it, in which the hero is involved in a private space program, something Aldrin has always promoted, and with all those recent space program cutbacks, maybe he's right.

I have memories of the moon landing, because they let us go home from school to watch it. If it was now, we'd all be gathered in the school library or a hall - funnily enough my own school didn't have a hall and neither does the one where I work now - and the info tech teacher would set up a link to the Internet so we could watch it as a school.

I wasn't a great reader of SF till after my school days were over and I was babysitting for my sister and raiding her shelves, but I did read some of the classics by Verne and Wells. It's interesting to compare what the two of them had to say about moon flight. Jules Verne had his moon trip beginning in Florida and thought carefully about how it might work, whereas Wells just had some made-up stuff to make his spacecraft float. I think that after Wells was rude about the Verne book,Verne actually said something along those lines, that at least he'd done his homework instead of just making up something out of his head. But Verne really was a science fiction writer,  while Wells was more interested in politics and social justice, even if he used SF to talk about them.

There isn't a lot of written, as opposed to film, fiction bout Apollo II, as far as I know, though it is a part of Stephen Baxter's wonderful novel Voyage, which speculates what might have happened if the US had gone for Mars instead of the space shuttle. The heroine becomes the first person to walk on Mars.

Well, what do you know, I HAVE written about books in this post!

So before I go, here's a photo taken in Sydney at Mascot Airport on July 21 1969, which I found under the Creative Commons licences, from the days when there used to be TVs in shop windows. Enjoy!

Posted by Sue Bursztynski at 4:54 AM