Sherryl Clark In The West!

Yesterday we had our YABBA Ambassador visit. Sherryl Clark spoke to the Year 7 and 8 students and some older ones who came because they were in my book club and wanted to hear her. Some had been reading the books I bought in advance of the visit although nobody actually asked specific questions related to the books they had read and the girl who had asked me if she could ask questions then was too shy to speak them herself, so wrote them down for me to ask on her behalf. But they,too, were general questions. One of my book clubbers couldn't make it due to SRC commitments, but met us in the hallway and told Sherryl how much she had enjoyed the book she'd read.

It was a hectic day for me. I had some drama in my literacy class, felt bad about it and went to seek the child I had upset. Then I rushed to the canteen, which had prepared lunch for me and my guest. Then I hung around, panicking when she was a tiny bit late. What if she had got the dates confused? What if...? I think it was my nerves.

But she turned up a minute later and all went well. She talked about her books and dear me, hasn't she written a huge variety of genres, from short humorous books for younger readers to verse novels and fantasy mysteries for teens. Apparently, her bestseller is her first book, The Too Tight Tutu, which is based on her own experiences as an overweight child doing ballet lessons. With some of her books she has bought back the rights and self published because there was still demand for them but the publishers weren't interested in keeping them in print.

There were some quite good questions from Year 7 and I invited Sherryl to choose a couple of students to receive copies of her books as a reward for the best. I usually do that as an encouragement to get them started, but it wasn't necessary this time, which was nice. You know, nobody wants to be first? Not a problem this time.

After lunch, we returned to the library, where the Year 8 students were even better, and I have to say I was pleased and relieved. We have a lot of difficult students in this year's Year 8 and apart from one or two, whose teachers took them away from the others, they were really very good and asked some great questions, including some of the most difficult students of the lot! In fact, two of the three prizes went to some of our harder-to-handle boys. One of them was so chuffed he showed off his book to the sub school leader who has given him many a detention.

After the session I had students asking to borrow some of Sherryl's books, which I had on a display. Some were out, but others were grabbed.

A successful event all round. Pity I couldn't even get a reply from the local press, but then, for them it's just another ho-hum author-visits-school event, big deal, it happens all the time. I did explain it was a special program run by YABBA, for only twenty-five schools, but no interest.

It's not a ho-hum thing for us. When I first arrived at the school, we had an annual writers' festival. The Principal gave us $2000 for inviting writers to speak. Not a lot, but enough for each campus to have someone, and we supplemented it with free visits from myself and Chris Wheat, my colleague who has written five YA novels. That was a principal who respected us and what we did. There was a college head of library.

Now my budget is half what it was back in the 90s and no college writers' festival. We just don't have the money to bring in guest speakers, so having a freebie like this means a lot to us and our students.

I hate that I can't do more, but never mind, it was a great day, if exhausting. Thank you, Sherryl, and especially thanks, YABBA, for paying for this! 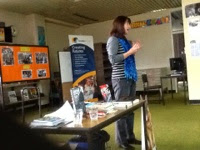 Posted by Sue Bursztynski at 2:49 PM