In Which I Go To Sydney 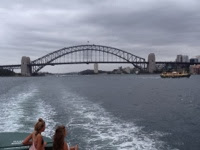 I'm in Sydney this week. I arrived Monday, when all I did was settle into my YHA, a very comfortable place right near Sydney Central station, do my shopping and meet my friend Edwina Harvey. I haven't stayed at a hostel for some years now, but it's amazing how quickly I settled back into the routine.

Yesterday I had the day to myself, so I made lunch and went down to Manly on the ferry, a favourite activity of mine. Here's a picture of the view from the ferry. While there I did a couple of things I hadn't done before - I visited the local art gallery/museum, a small place which held a portrait display by Bill Leak and a number of pictures centred around early encounters between English and indigenous folk. That didn't take long and I had time to visit the next building. It's called the Manly Sea Life Sanctuary. Really, it's just an aquarium, though a very nice one. I saw the feeding of the Little Penguins, which also swam around in a pool with other sea creatures, including a gummy shark. Looking at this harmless creature, I thought, all these kids watching will have eaten its relatives on fish and chips night. The penguins were unbelievably cute! I have seen them before, of course.  There's a colony at the St Kilda breakwater near my home and I even spotted one preening itself on one of the boats one morning. But this was the closest I've seen them.

Returning to my hostel I waited for the delightful Will Kostakis, who was joining me for afternoon tea. He's currently working at the Sydney Cricket Ground to pay the bills and was on his way home to start work on his next YA novel. It has taken a while, but he's on his way to a writing career. Good luck to him!

Today I'm meeting Edwina again and we're going to the Blue Mountains where I've been many a time, but this time not for the pleasure of seeing the Three Sisters and hiking around, but to scatter some ashes - those of Jan Howard Finder, that delightful American SF fan who so loved Australia that even when he wasn't here, he was reading our newspapers on line. He loved wombats, especially the Northern Hairy Nosed Wombat, which has become endangered. When he died, his partner arranged for his ashes to be taken to different parts of the world which he had loved. My friend Ann travelled to the US and attended a memorial event, Wombatcon, where she collected a bag of ashes.

It will be a bit cool today, so I will take my poncho and an umbrella and I've been warned to wear walking shoes. I'm getting up as soon as this is posted, dressing and have a quick breakfast before Edwina arrives. More of this later.
Posted by Sue Bursztynski at 11:30 AM

Aww, so jealous! I've always wanted to go to Australia.

Sarah Allen
(From Sarah, with Joy)

Hey, I live here, in Melbourne! Maybe I'll visit the US some time. :-)

Happy new year! Hope you had a great time in Sydney