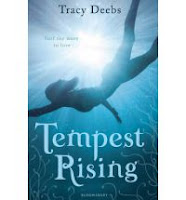 Tempest Maguire is a half-mermaid. She lives with her father and younger brothers, since her mother went returned to the sea some years ago. She has been living a normal human, middle-class life, with friends, school, boyfriend and surfing.

But now her seventeenth birthday is approaching. Despite a letter from her mother telling her that she will be able to choose, when the time comes, whether to stay on land or become a mermaid, she is suddenly sprouting gills and has – temporarily, anyway – grown a tail while in the middle of surfing.

Then there’s the evil sea-witch, Tiamat, who is after her for reasons connected with a prophecy and a hunky surfer, Kona, who is more than he seems.

How do you go on with your normal teenage life when all this is happening?

This paranormal romance has the elements that girls look for in this sort of fiction – a heroine with supernatural gifts, a romantic triangle with two gorgeous boys, both crazy for her, one of them a supernatural being – we’ve had fallen angels and angst-ridden vampires and werewolves, why not a sea-creature? – a prophecy concerning the heroine and a villain who wants to use her gifts to get power.

The author has played with elements from different mythologies/folklores. Tiamat is the name of a Babylonian creatrix-goddess connected with the sea and selkies, the seal-people, properly belong to Celtic folklore but appear Hawaiian in this novel and seem to live in the tropics. It would have been nice if there had been some acknowledgement of this at the end, which might have sent young readers to look it up.

Although it can be read standalone, there are elements towards the end which suggest a sequel to come. The girls at my school will almost certainly be nagging me for it when the time comes.

Posted by Sue Bursztynski at 3:06 AM

Sounds like a fun read - but I do think it's a shame when authors don't acknowledge their folkloric sources.

Personally, I don't think the main readers for this book will notice or care, but if acknowledgement is there, they do look up things. One of my students, for example, asked me to get in a copy of the Meditations of Marcus Aurelius because a novel she was reading had a philosophy theme and mentioned it. It was a strange request, but I bought the book, which wasn't expensive and at least served her curiosity. And you never know when someone else will read that novel and ask. Something like this - selkies and Tiamat - would pop up on the Internet with no problems. Ah, well.