Greetings Great Raven readers. Once more, Selena Wang, guest blogger, is with us to interview yet another terrific writer. This time, it's award-winning Cath Crowley, whose book, Graffiti Moon, has already picked up a number of awards - the Ethel Turner Award for Young People's Literature, the Prime Minister's Award and an Honour Book in the CBCA Awards. It's currently on the short list for the Victorian Premier's Literary Awards. With good reason, by the way - it's a funny, gentle, delightful story.

SW: Where did you get the idea for this novel?

CC: The idea for Graffiti Moon came from a few places.

Shadow and Lucy, the main characters, connect through art. So the conversations that they have are inspired by the artists I love - Mark Rothko, Sam Leach, Rosemary Laing, Jeffrey Smart, Pablo Picasso, Johannes Vermeer, Michael Zavros, Rosalie Gascoigne, Bethany Wheeler, Ghostpatrol and Miso. I wanted to write about two people who speak through images as well as words.

But all of those things were just the initial sparks. Then I made the characters.

I think probably the real idea for this novel started about five years back, when I was working with a group of very smart students. They were the most creative, determined people I’ve ever met and they had to be – they had learning difficulties and they had to learn how to survive and do well in the school system.

SW: Why graffiti? Has any particular piece ever caught you or do you know someone who does it?

CC: Only part of the novel is about street art. A lot of the art that Shadow and Lucy love are works in galleries.

When I was writing I had it in my head that Shadow loved artists like Ghostpatrol, Miso, Regan Tamanui and Banksy (maybe because I love them). I found some of these artists myself. Some I found by asking questions of young people. Some I found by having conversations with artists like Marcus Jobling, who has an interest in the area. I also spent quite a bit of time on trains looking out at walls.

I did a little bit of looking at the street art in Melbourne – and it’s amazing. Hosier Lane, in the streets that run off Brunswick Street in Fitzroy – I went there at night and during the day. I went to Union Lane in the city and Smith Street and Flinders Lane.

But I stopped pretty soon – because Ed is a total outsider – I didn’t want him fitting into any group. I wanted to write about someone who was outside the outside. And I knew the book would be about art – in all forms – and I didn’t want it to be about a street artist. I wanted Ed to love Ghostpatrol but also love Jeffrey Smart and Vermeer and Sam Leach.

I had a feeling if it was too much about that then people might not see that the book is about seeing – how we see art, each other, the world.

I knew too that the art he made would show the reader that landscape inside his head – so all of his art had to come from my imagination and I was worried that if I kept looking at the walls around Melbourne I wouldn’t be able to get that out of my head and I wouldn’t be able to create Ed’s inner world of ghosts trapped in jars and hearts rocked by earthquakes and birds trapped on bricks walls, trying to escape.


SW: Were any of the characters based on real people?

The characters weren’t based on real people but the people I met inspired me. That poet in the park gave me an idea that I couldn’t get out of my head. What if someone who looked dangerous, who looked nothing like we think a ‘poet’ might look, wrote words in the night? When I met that poet I thought he was going to rob me. Instead, he asked me to go the tattoo parlour with him. He needed someone to pretend to be his mum because he was underage. (I didn’t go.) But instead of being robbed, he gave me a story. Fitting, considering that Graffiti Moon is about how we perceive and misperceive people.

SW: Was any event based on fact?

CC: I did meet a boy who egged his girlfriend, but I changed their personalities to suit my book. I did meet a girl who told me she was psychic, but I changed her too, of course. When you make a character you have to build their whole inner world. So I get ideas from meeting people, but that’s never enough to make the whole character.

Graffiti Moon is set on the last night of Year 12. That night has a strange sort of momentum to it – I remember feeling as though my whole future would happen the next day. I wanted to write a narrative that had that same urgency, so keeping a tight timeframe was important.


SW: Reading about glassblowing made me want to try it. Have you ever done any yourself? If not, how did you research it?

The inspiration for Lucy’s glass came (in part) from an artist called Bethany Wheeler. You can see her work at http://www.bethanywheeler.com.

I love Bethany’s work and she generously agreed to an interview. I spent some time in her studio where she explained the process of fusing and slumping glass. She talked about her experiences as a Year 12 student learning about glass. I knew after meeting Bethany that Lucy would want to be a glass artist.

SW: Have you ever seen any verse on walls?

CC: I haven’t seen verse on walls, but I’ve seen words written like this below. It’s not a poem but it make me think about who wrote it and why. I think fear is at the core of Leo. He has to overcome that so he can tell people about his poetry and so he can be with Jazz. 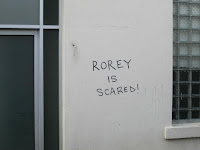 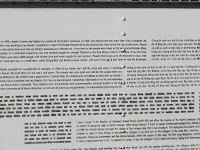 SW: Which Melbourne suburbs were you thinking of in this book? Did you see them by night? Do you have any stories about this?

CC: I drove around Footscray, so I was mainly thinking about that suburb when I wrote the book. I did mix it with other places, though. When Lucy and Ed are in the park I had the Merri Creek track in mind. There’s a path I used to walk and there’s quite a big drop there.

I don’t have a car, and I needed to drive past the docks on Footscray Road at night. I hired taxi drivers, which was a bit weird! I bribed friends to drive me over the Westgate and back and past the docks. Some nights I hired cars and parked in different places hoping to see people doing things at night that might inspire me. That’s a bit strange too, I guess. But it worked.

SW: Why did you choose to do the book from different viewpoints? If you could only do it from one viewpoint, which character would you choose?

CC: This is a great question. I think I would have to tell the story from Ed’s point of view. He is the main character to me. (Although I’m attached to them all.)

I often write from different viewpoints. I think it’s because I love writing in first person. And also because I’m preoccupied with how we perceive the world. How we see ourselves is different to how everyone else sees us. It’s fun using two narrators to explore this idea.

CC: Of mine? Graffiti Moon. Of someone else? I loved Fiona Wood’s Six Impossible Things.
Posted by Sue Bursztynski at 10:32 PM

What a great interview! Thanks for leaving me the link. :)

Glad you like it, Alexa! I'm rather proud of Selena and Cath was just terrific - she gave us a lot more information than we expected.