Shaun Tan does it again! 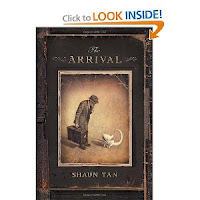 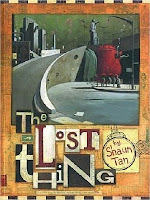 Rejoice! Having won a Best Artist Hugo only last year, our very own Aussie Shaun Tan has now won an Oscar for the short film based on his book The Lost Thing. Not only that, but they're talking about doing a feature-length version of the wonderful The Arrival.

It's terrific to think that a guy who does books for children can do so well in the world and his name can be known to more than just the kids and the librarians and teachers, like me.

I remember when I first saw The Arrival - I can't say I read it, because it had no text, but it told a story it took me some time to absorb, about a man who arrives in a new country, fleeing the old one, to make a place for himself before sending for the family. It said so much about the refugee experience - and the migrant experience in general - without a word, and I then saw a play version, again without words.

Maybe it will get him another well-deserved Oscar when it's filmed?

I'm going to drink a toast to Mr Tan tonight.
Posted by Sue Bursztynski at 11:26 PM

I only just found your comment on my blog, Sue - since I've moderated comments I find I miss quite a few because I forget to check for ones that are awaiting moderation! But I'm glad you liked Katherine's review; I know she enjoyed reading your book!

It would be great if you could sub something for the Specusphere antho. Subs are trickling in a bit faster now and we have found half a dozen gems so far. I'm sure you would send us a gem, too:-).

Hi Sue. Do take a look at the Facebook group "Staszowers". I asked them, and have also asked our relaties, and have not yet found a connection with Zelda Wolbromski or with Altbaum. Could they be from the town of Wolbrom? Several groups may have this name. Do read my blog for lots more Wolbromski lore. nomikaston@yahoo.com

Thanks for checking this out, Nomi. I've emailed you as well. It would be nice if we were all related, but if not, I wish you all the best with your own family and finding any missing. A lot of people went missing after the war, even those who survived. I found a Walter Bursztynski who's probably not related to me, but we're not sure and we correspond anyway, because he's just such a nice man and *may* be related.. :-)