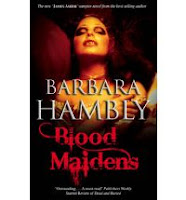 It's 1911. Oxford university lecturer and former spy James Asher and his doctor wife Lydia are asked by their vampire friend Don Simon Ysidro to accompany him to Russia. He's worried. He's had a letter from a woman he once knew in England, now settled in Russia's vampire community. Something terrible may be about to happen in Russia that will affect the world.

Well, that's what he wants them to believe, anyway. In fact, it may be more personal than that - and yet, he might be right. Once again, in this third novel in the series that began with a book called Immortal Blood on my side of the world and Those Who Hunt The Night in the US, James and Lydia are caught up in adventure and danger.

The question in this one is - can vampires love? The answer seems to be yes, and not only for Ysidro, who once begged this woman not to turn, but to tell you more here would be a spoiler.

I like the way Barbara Hambly presents her vampires. Unlike many other writers in this time of the mega-selling paranormal romance, she doesn't sentimentalise them. The reader is never allowed to forget how Ysidro and his fellow vampires survive. Even Ysidro admits that you have to be pretty selfish to agree to become a vampire. At the same time, he has enough positive qualities for James and Lydia to try not to think too hard about this.

A nice touch here is the way the Russian aristocracy behave like vampires towards the lower classes. No one actually says it, but you can't help thinking so as you read. And reading it, you know exactly what's going to happen to those aristocrats in only a few years...

Recommended!
Posted by Sue Bursztynski at 1:14 AM