Recently, I received an inquiry from David Pauly, author, lawyer, qualified French chef, who has also written quite a few books in his Nostraterra fantasy series. I’ll let him tell you about it below. Among other things, David’s writing helped him get a wife!

Take it away, David!

I have always been interested in fantasy books, beginning with the Chronicles of Narnia and The Lord of the Rings.  I always wondered after finishing these series and others what would happen after the story ends. So I set out to create my fantasy world, which tells the story of what happens after the war against darkness is over.

At the time, I was recently divorced, living in the east mountains of Albuquerque, and besides karate class three times per week, I had a lot of time on my hands.  So one night, I started writing and in a few days, I had some pages, and then the first finished chapter.  I sent this to my brother, another fantasy fan, and he was impressed with my rough draft and encouraged me to continue.

I had very little self-confidence in creative writing, as I had been told all through school, including university, that my ideas were far-fetched, I had no sense of writing structure and that my grammar was atrocious.  So, I had to conquer a lot of self-doubts to even begin writing.

I had the luxury/curse of being a self-employed lawyer and unless I had morning court, I could stay up the night before and write.  I soon developed a comfortable routine: open a bottle of red wine, light scented candles, and put on the headphones to listen to creative inspiring music, which in my case means progressive rock like Pink Floyd, Genesis, and Tangerine Dream.

After finishing the book two years later, I began re-writing it again to make it flow properly.  Once done, despite sending out dozens of query letters, the only publisher that would accept my book was a vanity press.  I was determined to see if this would work and ordered 200 trade paperback copies.  Despite my best efforts at trying to sell them myself, it did not work and I got down on myself for a while.

I only received a couple of reviews and those pointed out that the book still seemed to be a work in progress, with too many plot holes and grammatical mistakes.  I bit the proverbial bullet and hired an editor to review my work.  He provided many examples of where and how I needed to fix my book, and after another two years of back and forth, the book was finished.

At this time, I finally thought about dating again and went on Eharmony to see how it would go.  I met a brilliant woman from Vietnam with whom I had a lot in common, but she was wary of giving me her contact details in Vietnam as I might be a serial killer or some other weirdo!  I sent her the book, which she read, and seeing that I was creative without being too crazy, she initiated contact and we were married 6 months later, and remain happy with our 10-year-old daughter to this day. 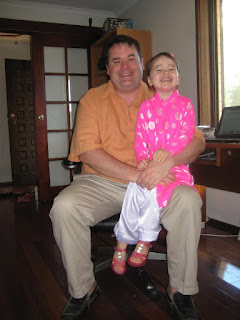 I split the book into three separate novels, to make it easier to market.  The first novel, Assassins, introduces the reader to my world, where I blend the politics of the 1990s and 2000s into a medieval fantasy world.  Despite my editor’s insistence, I could not make an individual antagonist and protagonist; it just didn’t flow with my story.  Instead, the book has several important characters, all flawed in some way, who believe that not only are their motivations self-interested, but they are acting in a way that they believe is best for their race and the world at large.

Finally, one of my hopes in writing this series, and I continue to write the second series, is to inspire others to write their own story.  I would urge you to look at the ideas in which you are interested, the genre is irrelevant, and just start writing to express your ideas and get them written down  You just might surprise yourself that you are cable of writing something that expresses your talent and interests well.

I know that I did.

David’s books are available from the usual web sites, such as Amazon and Book Depository. If you live in Australia, you can find them at Dymock’s bookshops. He tells me there is about to be an audiobook!

Posted by Sue Bursztynski at 3:47 AM

Thank goodness you hired an editor to review the work :) The author knows his or her own writing off by heart, forwards and backwards, and the eyes would glide over imperfections. Your editor politely (I hope) suggested examples to improve your own book, and although it took some time, I hope you were delighted when the book was finished.

Very wise to hire an editor! Many self-published books could benefit from one!

Hi Hels! Yes, it’s too easy to miss glitches when you have read and reread your own work. And an editor is there to make your book look its best.

Hi Debra! Very true, there are so many self published authors who spend all their money on marketing companies instead of someone who can help them improve their work. Always good to see one who understands the importance of good editing!