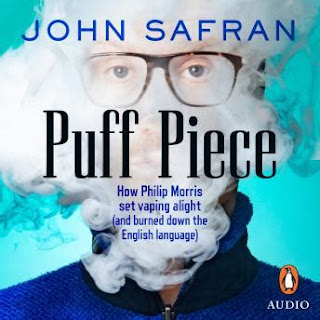 This is comedian John Safran’s third book. The first one, Murder In Mississippi, had John investigating the murder of a white supremacist whom he had annoyed while filming his TV series Race Relations.

The second, Depends What You Mean By Extremist, was about racist groups in Australia. He turned up at rallies and took notes.

Both books, despite the serious themes, were very funny, written in Safran’s deadpan style of humour. Really, he didn’t have to do much. The racists in both books opened their mouths and made themselves look ridiculous.

This book does have humour in it, though not the laugh-out-loud kind, but despite the author telling  interviewers he hoped people would enjoy it, it feels, to me, at least, that the author is truly angry. He doesn’t mention a personal reason for this, no relatives who have died of cancer, but - angry.

This anger is directed at Big Tobacco, specifically Philip Morris. See, Philip Morris has a new product called a Heat Stick. A Heat Stick is supposed to be less bad for you than regular smoking but is, in fact, indistinguishable from a cigarette.

He bought some shares in Philip Morris so he could attend a shareholders’ meeting to ask questions(they wouldn’t let him into their premises when they found out he was doing a book), but when he attended the Zoom meeting, he didn’t get a chance to ask his question.

He discovered in his investigations that a lot of health organisations had been given money by Philip Morris - in fact, he found out, to his horror, that his superannuation investments included a company that had Philip Morris lurking in their background.

It seems to be almost impossible to avoid the tentacles of Big Tobacco. I’ll have to check out my super fund, though we were assured at a seminar that they only invest in ethical companies.

One thing I have to say for John Safran is that he is very good and thorough at doing his research, both in his other books and this one. It’s a real eye-opener. I don’t think he could have done this as a TV comedy show.

Definitely worth a read, as long as you don’t expect it to be hilarious. There isn’t a bibliography or list of suggested web sites at the end, but there is enough information there for you to do your own looking up.

I bought my copy at Apple Books, but you should be able to get it at your local good bookstore or on line, though.

Posted by Sue Bursztynski at 3:28 AM

Let me be open.. I LOATHE cigarettes. Even the smell of a cigarette across the street gives me a headache.

Hi Hels! Read the book is all I can suggest. It’s quite detailed. I would imagine that the publishers would have a legal person to make sure he didn’t say anything that would get them sued.

Hi Sue - I too loathe cigarettes, but think worse are the vapers ... foul false scents and I'm sure they're worse than cigarettes - we've no idea ... I must look out for John Safran's book/s - thanks for alerting us to this Aussie author - cheers Hilary

My stock broker told me once that he will never invest his own money or any of his clients' money in the tobacco industry. Ethical investing is really hard. Different companies are connected in lots of different ways, and it's hard to know for sure how your investments are being used. But if you're going to draw a hard line about something, refusing to invest in tobacco is a pretty good line to draw.

Hi Debra! It IS good! See if you can get his other two books, which are very funny, while saying something.

Hi Hilary! Vaping is …disgusting. That cloud of smoke going up from the gadget, and people do it in the street. And those various flavours make it seem harmless. But I do have a friend who took it up as a way of stopping smoking, and now she doesn’t smoke OR vape. And she had been a smoker ever since I knew her.

Hi James! I’m glad your stock broker is firm about ethical investment. My superannuation fund has assured us that they are ethical investors too. It is hard to tell, of course. In John’s book, that is made clear.