On Bingeing On Streaming Services!

What are some ways of coping with lockdown? Well, one way is to catch up with shows and films you missed when they came out. And we in Victoria are on our sixth lockdown! So, I’m doing streaming. 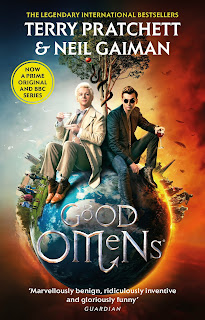 I am now up to my fourth streaming service. I never intended this, but it happened. I started with Prime to see the wonderful adaptation of Good Omens by Terry Pratchett and Neil Gaiman. Then I discovered there was another Neil Gaiman adaptation, American Gods, a book I loved. I intend to see The Man In The High Castle as soon as I reread the Phillip K. Dick novel. There are many other things, including some Star Trek stuff, such as Picard, written by Michael Chabon.

And there’s Shakespeare! Well, it’s The Hollow Crown, which shows some of the history plays, even if they are cut down a bit. I’ve seen Henry IV Part 1, Henry V and am now watching  Richard II, with Ben Whishaw in the title role, and Patrick Stewart as John of Gaunt, doing that gorgeous speech that ends “this England.”

Plenty more, but let’s go on. My next subscription was Disney+, which has all the Star Wars material as well as old Disney movies(I finally found the Richard Todd Robin Hood, but only watched about fifteen minutes when I concluded it was truly awful. But I also discovered they had 20,000 Leagues Under The Sea, with Kirk Douglas as Ned Land the harpooner, and yes, he could actually sing!

I’ve watched Chariots Of Fire, with Ben Cross, and Ladyhawke, both beautiful films, though very different.

What I have really been doing, though, is bingeing on the Marvel movies and TV series, which have impressive cast lists and directors such as Kenneth Branagh and Joss Whedon. But I’ve mentioned those before, so on to the next steaming service.

That’s Apple. I’m planning, when time, to watch For All Mankind, an alternative universe in which the Soviets got to the moon first. I do love that sort of alternative universe! I read a novel by Stephen Baxter, Voyage, in which Kennedy survives and the space program goes to Mars instead of the space shuttle. A woman is the first astronaut on Mars. That would make a great TV series! Mainly, though, I subscribed because that is where I can watch the adaptation of Asimov’s Foundation. I really need to reread that before watching!

Most recently, I have subscribed to National Theatre At Home, which shows filmed versions of plays by a Britain’s National Theatre. They did it free on YouTube during the first big lockdowns, but now it’s streaming and you can watch stuff they have performed to live audiences. Not cheap, but I have so missed my theatre subscriptions over the last year and a half!

And there are some big names in British acting. I have just seen Coriolanus with Tom Hiddleston and the multi talented Mark Gatiss. I performed that play when I was at university, playing the role of Third Citizen and a Roman standard bearer in the battle scene(I got killed after waving the flag a bit, as well as nearly choking  on my breastplate in rehearsal when I “died”), and it was fascinating to see what the NT did with it. Coriolanus, that brilliant general who is not much good at anything else, is killed in the last scene, of course, but as I recall, it ends with the person who did it saying (in Shakespearean language) “Oh, dear ! I really shouldn’t have done that, he was such a hero, let’s give him a fabulous funeral.” He is carried off with a fanfare(in our production it was “Fanfare For The Common Man”). In this production he is knocked to the ground, then strung up and has his throat cut… yuck! And no apologies or heroic funeral.

I see the Ralph Fiennes film is currently on ABC iView, and will watch that.

I’m currently watching Antigone by Sophocles. It’s set in a government office. The Chorus are a bunch of public servants. And we have two Doctors in the lead roles, the ninth and the thirteenth! Christopher Ecclestone played King Creon and Jodie Whittaker was his niece, Antigone, daughter of Oedipus, who gets into huge trouble for burying her brother, the one who fought against Thebes. They are both brilliant, playing with their own Lancashire and Yorkshire accents, and why not?

Next planned show will be Frankenstein with Benedict Cumberbatch as the creature.

Not quite as good as going to the theatre, but at least I get to see it!

Posted by Sue Bursztynski at 12:48 AM

I hadn't seen Kenneth Branagh for years, then accidentally saw him acting on tv this week and he was sooo good, I felt his pain. Now might be the time to go back into your older posts to see which Marvel films you recommended.

Streaming services DO tend to add up quickly, don't they? Currently I subscribe to six, of which my fave at the moment is Disney because of all the new Marvel series. I did have a free one-year sub to Apple TV because I bought an iPhone, but I didn't renew it once my year was up. There simply weren't enough things on it that I wanted to see. But I CAN recommend Apple TV's series "Defending Jacob" with Chris Evans.

All excellent choices you've mentioned. Many we have seen and some yet to enjoy, so there will be no shortage of watchable material for the foreseeable future! :-)

I ended up binge watching a lot of newer children's cartoons during COVID: The Owl House, The Dragon Prince, She-Ra (the 2018 version), Avatar: The Last Airbender, and The Legend of Korra. I've been surprised how good these "kids" shows are. I wish they'd been around when I was growing up.

Hi Wendology! Yes, plenty to enjoy. I just got an email from National Theatre with some mouthwatering new shows.

Hi James! Children’s programs here in Oz are the best, with the Children’s Television Foundation. I’m glad we have such special stuff for the kids.