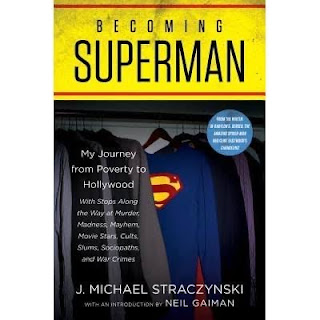 This book was shortlisted for a Hugo Award last year, at ConZealand, the World Science Fiction Convention, in the category of Best Related Work. It lost to a two paragraph acceptance speech by an author from the previous year. That set a precedent, I suppose, though if there is another acceptance speech winner in this category this year, I will not be impressed.

What does impress me is this book, which I received as a PDF document in the Hugo reading and have just bought and read properly. My jaw dropped to realise that the author and creator of the Babylon 5 TV series had a truly horrible childhood and youth, with a very dysfunctional family, a violent, drunken father who had been a Nazi collaborator in his teens, along with his mother, Joe’s grandmother Sophia, who had affairs with Nazi officers and - no, read it, it’s too horrible to describe here.

But in the end, if you can get through all the dreadful stuff that happened to him, the book sends a positive message. The title says it all: in his childhood Joe Straczynski aspired to be Superman, not for the super powers, but because Superman is kind and decent and cares about other people. He had a Superman badge which he pinned inside his clothes, as Superman wears his costume inside his clothes. It gave him courage. In the end, he succeeded, because he refused to let anyone tell him he couldn’t do anything - and urges his readers to do the same.

He has been through pretty much every type of writing, refusing to change his career, even when he was starving and nearly out of money. If he was cut off from one kind of writing, he tried another, so has done everything from journalism to animation to TV and film to comics. Even if you have never seen Babylon 5, for which he is most famous, you almost certainly have seen or read something he created.

A lot of the changes were because he refused to compromise when it would have meant destroying something he had worked on, and simply resigned. His agent protested every time that he would never work in that area again... and he got a job in another area, but always in writing.

But he does have a degree in psychology, which helped him not only in the writing, but to pick up problems that members of his Babylon 5 cast were struggling with.

Speaking of Babylon 5, if you are a science fiction fan, you may have noticed the similarities between this show and a science fiction series in a certain other SF franchise. Well, he suspects it too, and talks about it in this book.

There is a touching feel of imposter syndrome in this author, who keeps mentioning how amazing it felt to be hanging out with famous people he admired and being allowed to create comics about Spider-Man  and - wow! - Superman. Never a boast of “I deserve this!” but the attitude “I worked hard, but wow! They liked my stuff! I got to write about my childhood hero! Me, the poverty stricken boy from New Jersey! And you can do it too. Don’t give up.” I doubt if I’m ever likely to write award winning TV shows, but I do see his point.

He came to Melbourne for Aussiecon 3, the World Science Fiction Convention, when I was on the committee(running the children’s program) and sent us a letter asking if he could help. Could he help? Oh, yes!

Thing is, in his memoir he mentions that he is terribly shy about speaking to groups even now, but he hid it well in his guest of honour speech. I remember that day. The entire convention shut down to hear him. I closed even the children’s room. He was wonderful.

If you are interested in media and writing and what’s behind it all, this is the book for you. It is powerful and inspiring, and once you’ve read it you can see what is behind his writing. I’m reading his first Superman comic now, and can see Joe Straczynski peering out from Clark Kent’s eyes.

Easily available on the usual web sites. I bought my copy on Apple Books.

Posted by Sue Bursztynski at 5:53 PM

I liked Babylon 5 a lot . It is a pity that one of Straczynski's spinoff series took off, as I understand it there was can entire Universe created.


I have also seen him speak a couple of the times. He is an interesting guy. The book seems worth when.

Definitely worth a read! I liked Crusade, but not his fault it was scrapped. He explains in the book what happened.

I once heard Peter Woodward, who played the technomage. His father, Edward Woodward, needed the work to stay in the US to work, so Peter arranged for him to get that episode. A lovely scene, where they were both having a good time, after Edward’s character scared the hell out of people with an illusionary giant dragon, and Peter says,”You used to do that for children’s birthday parties!” 😂

This book DOES sound good! I like books about people overcoming horrible childhoods and reaching success on their own terms. It's going on my "to read" list.

Hi Debra! I hope you enjoy it as much as I did!

I remember enjoying Babylon 5, even though it was often a sci-fiversion of Lord of the Rings. Far more than Star Trek in fact. What modern TV series do, with long story arcs and complex plots, Babylon 5 started it. Was not a big fan of Crusade though, which felt rushed. Green lit too early?

Ah, yes, Guillaume, I noticed the Tolkien elements in B5 too! The Shadow planet Zahadum, the Nazghul-like spaceships, the mysterious Lorien, John falling down into the deep(well, jumping), even that cry of “the Eye!” IMO, the Minbari were the Elves. And yes, it was indeed B5 that introduced the story arc....

It might be worth your while to read this book to find out what the issues were with Crusade, if you haven’t yet. But I liked it. B5 was the magnum opus of 5bis universe, but I did like Crusade.

Yes it's the kind of book I'd like to read. I quite like JMS, I think he's a great storyteller and plotter, although his dialogues are often shaky.

There were some wonderful episodes, and some stories that they wouldn’t have got away with in the original Star Trek, such as David Gerrold’s Believers. And who knew that a piece of technology from an early episode would play such a vital role in a much later one? I’d say that the story arcs alone make this show amazing, whether or not you like the dialogue! 🙂

Oh he went where Star Trek never dared to go, no doubt. Babylon 5 is proper mythology, with some really neat ideas.