Look What I got Secondhand! 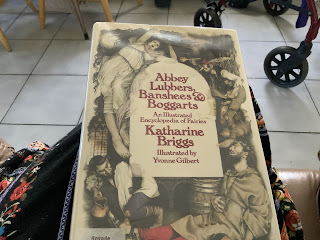 Look what I got! It arrived from ABEBooks a couple of weeks earlier than it was due. ABEBooks is a web site that sells secondhand books from bookshops around the world. I have only bought two books through them before, one called Schmoozing With Terrorists, which I heard about on the radio, but wasn’t available in Australia. The other was the autobiography of Murray Beresford Roberts, one of the crooks I was researching for my book, Crime Time: Australians Behaving Badly.

The good thing about this web site is that each book they offer is described in detail so you can decide if it’s worth spending the money. And they keep sending you information about books you have asked for till you buy the copy that suits you.

This one came from the US, is a former library book, nicely covered and is in better condition than I was expecting from the description.

I really wanted this author’s Encyclopedia Of Fairies, which is out of print and doesn’t seem to be available in ebook. But this is a sort of abridged version which, however, according to the introduction, has some extra stuff in it. And I had got to the point where I really wanted something, after years of emails offering books that were either not in good condition or cost more than I was prepared to pay. So, when this one was reasonably priced and in fairly decent condition I bought it.

I used books like this, on folklore, when researching for my novel, Wolfborn, but this is regarded as a classic, written by a top British folklorist. It’s easy reading and, I suspect, has a young audience in mind. I have been curling up with it when I had some peaceful time to myself, and am enjoying so far.

I’ll let you know how it goes!

Posted by Sue Bursztynski at 6:29 PM

ABE Books is a wonderful resource. I have bought many books from there and will probably buy many more. I am currently wanting a series of books that are out of print and no longer available on ebooks (I bought the first one about 2 or 3 years ago, finished it and wanted more and in that time they'd been removed), but at the moment they are too expensive (the Barbara Seranella's Munch Mancini series).

Thanks, Debra, I’m enjoying it already.

Hi Anita! Yes, there are some very expensive secondhand books out there. The good thing about this site is that you can wait till one with a reasonable price comes along.

What a pain when an ebook disappears! My sister and I prefer Apple Books to Kindle, and she says she has found books vanishing from Apple when Amazon publishes them. I do have a Kindle app, though, so if I can’t get the Apple version I check Kindle.