And The Last Trump Shall Sound: A Future History Of America, Caezik, 2020 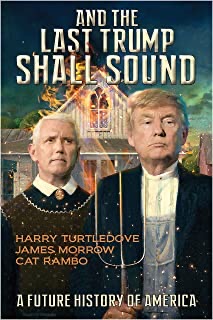 This is three linked novellas by that master of alternative universe, Harry Turtledove, author James Morrow and former SFWA president Cat Rambo, who wrote a guest post here on the release of her novel Hearts Of Rabat.

The premise: in the near future, Trump is dead, from a second wave of COVID 19, and Mike Pence is President. A number of West Coast states have seceded and formed a new country, Pacifica.

The first story, “The Breaking Of Nations” by Harry Turtledove, is seen from the viewpoint of Nicole Yoshida, former Governor of California, now leading the group of states seceding from the US, where things have become very bad. It’s the set-up story, so has the heavy lifting to do in this book. But as it is the set-up story, you have to assume that the secession will work out, as it does.

The job? To impersonate the President’s spiritual adviser, Walker Lambert, who has been captured and is imprisoned in Pacifica. She resembles him enough that some Hollywood make up and prosthetics will help her pretend to be a man. The plan is to make Pence look crazy enough to sow doubt about him.

The story is hilariously over the top, and is my favourite in the book.

Finally Cat Rambo contributes “Because It Is Bitter”, a story seen from the viewpoint of GoogleSoft tech Ernst, who has been sneaking in his own research during work time, to complete his late grandmother’s project, involving an empathy serum. When all his files and notes are stolen in a break-in at his office, he must follow the woman he believes has stolen them over the border from Pacifica to the US. There, only six years after the split, the situation has become very bad indeed. Pacifica has its problems, but the US is far worse.

And Ernst discovers why he was really lured over the border, and it isn’t pretty...

I enjoyed the book, though it was scary because so many elements were so very believable. The technology in Cat Rambo’s story was more developed than I would have thought possible in the fifteen-odd years between now and the time of this story, but who knows? After all, only a few years ago Skype was a lot more fiddly to access than it is now, and the Internet as we know it has not been around that long. So, why not?

I bought my copy on Apple Books, but it should be easily available on the usual web sites, including Amazon and the Book Depository.

Posted by Sue Bursztynski at 12:42 AM

Thank you :) Did you know that Trump had Covid10 when you posted this? If not, your authors are cleverer than we would ever have guessed.

No, that information came out later. In the book, he had died in 2024, during a second wave. But I’m sure it will make more sales for the book! 😉

frightening how realistic these sound

Hi miki! Yes, the situation in the book is frighteningly realistic.

Wow. Based on today’s events it seems so prophetic.

It does! Mind you, it’s amazing how much relevant stuff is popping up. Mum and I watched an episode of Diagnosis Murder today. Dick Van Dyke and another person have been exposed to a man made small pox virus so are isolating and writing for Van Dyke’s policeman son to find thr antigen and track down who was responsible for the virus. And an entire beachside suburb has been exposed because of a burglar spreading it...

Well, the first premise -- Trump catching Covid-19 in the second wave -- has now come true! One premise down, the rest to go!

Hi Debra! Let’s see what happens. I think the prediction is not too hard to get right under the circumstances!