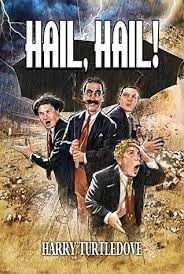 The year is 1934 and the four Marx Brothers(including Zeppo)whose film Duck Soup has recently come out, are on a train through Texas. They arrive in the small town of Nacogdoches, where they had once performed while in vaudeville. When the train is temporarily held up in a storm, they leave it to have a look around at their old stomping ground. Lightning hits, zapping them all back to the year 1826, when there was an attempt in that town to get independence from Mexico for Texas, under the name Republic of Fredonia, which sounds like “Freedonia”, the fictional country of Duck Soup. No Margaret Dumont, of course, but they encounter the Yiddish-speaking (historical) Adolphus Sterne and his Yiddish-speaking slave, and find themselves caught up in the rebellion. As they know a lot about what is going to happen, they are in a position to change history, though not willingly...

The story is seen from the viewpoint of the eldest Marx Brother, Julius, better known to his fans as as Groucho. The brothers are called by their real names, Julius, Leonard, Arthur and Herbert. Each of them has a personality unlike the character he plays in their films. Leonard aka Chico is a keen gambler. Arthur is definitely not Harpo. He became the one who doesn’t talk because he was hopeless at memorising dialogue. Herbert/ Zeppo is the youngest and best looking, but not much of an actor; Duck Soup was his last film.

If you’re expecting a Marx Brothers film in written form, you will be disappointed. These are the real brothers, not their movie characters. But they are still sharp and witty, especially Julius, and the historical figures they encounter are almost as absurd as the fictional characters in their films. The story is still fun and it should tell you something that I’ve been happy to reread it a number of times.

As far as I know it’s only available on Amazon, as a Kindle book, but it’s easy enough to get a Kindle app on your iPad. I’m glad of mine, as it has some books I can’t get on Apple Books.

Well worth a read!

Posted by Sue Bursztynski at 2:04 AM

The premise of this sounds unusual and creative. It seems curious that the brothers have their real personalities. The concept itself sounds like it could be very funny.

Hi Brian! Well, it’s fun, but not laugh out loud funny. I found I didn’t mind.

Wow that does sound fun.
Dear old Kirk. He had a good run. I remeber him in those movies and the dimple in his chin.
And don't forget the Man from Snowy River as a book/poem. (although his character wasn't in the poem)

I think he was “Harrison who made his pile when Pardon won the Cup”? They did add to it, of course.

I have become increasingly interested in clever, creative siblings who work together in their chosen field. This week I have focused on the Brothers Grimm
http://melbourneblogger.blogspot.com/2020/02/the-brothers-grimm-german-scholars.html
but there have been many other famous families eg the Shubert Brothers, the Allen Brothers (sic), Lever Brothers, Bata Brothers etc etc.

So the question we all have to ask is: what can we find out about the true, hidden interiors of families? Were the four Marx Brothers honest about each other or did they pull the curtain down between Family and Outsiders?

Hi Hels! I have no idea whether they were different in private, but they certainly continued working together after the films were over. That suggests they were okay with eac(bother, and at least two of them wrote autobiographies. They were amazing!

Thanks for the link, I’m looking forward to reading your Grimm Brothers post.