Just Been To See...Miss Fisher And The Crypt Of Tears! 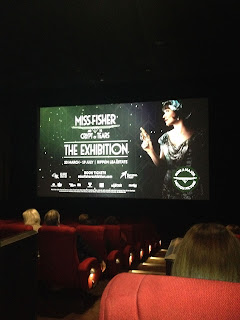 This evening I went to see Miss Fisher And The Crypt Of Tears at the Classic, my local cinema. I get their newsletter and simply couldn’t resist buying a ticket. It was not that much more than a regular ticket and you got a glass of bubbly with it. People were encouraged to turn up in costume, but I don’t have anything remotely like 1920s clothing any more. If it was a con, I might stitch some sequins on to a black t shirt, and I do have a hat that might do for a cloche, but there was no time, so I admired other people in costume.

I have been reading Kerry Greenwood’s Phryne Fisher novels from the start, after I read a newspaper article about a number of crime fiction heroines; the one who lives in 1928 Melbourne and zooms around in a flashy red Hispano Suiza car appealed the most to me and before I knew it I was reading the lot, buying them as they came out and attending the launches at the Sun Theatre in Yarraville. There are twenty of them. I doubt there will be any more, as they had gone over into 1929, and the author really, really didn’t want to go as far as the Depression.

But the TV series was visually stunning, the costumes carefully crafted and the scenery gorgeous. The creators have done their research on the 1920s, even if the first season episodes, which were based on the novels, were not as good as the books on which they were based.  The second and third seasons were original stories(the one about Jock McHale’s hat was only very loosely inspired by the short story, and they added a murder, so it doesn’t count). They were able to play with it as they couldn’t with the novels, so those episodes were better. Mind you, that romance between Phryne and Jack Robinson was not in the novels, where he was happily married with children. But audiences want some URST, and they got it; Jack was divorced with no children, so free to give his heart.

The third season, cut short because the star, Essie Davis, was off overseas to be in Game Of Thrones, ended with Phryne flying off to London to help her obnoxious father, with the implication that Jack will follow her.

At the start of this movie, which could happen because it was crowdfunded, he hasn’t actually followed her, for reasons you find out later, but he does go to England for other reasons I can’t tell you because spoilers.

It was great fun, and so was the actual experience of being there. It was a bit like being at a con, with people in hall costumes and there because they were fans. I arrived early to make sure I got a decent seat, and asked a lady at one of the cinema foyer tables if she minded sharing. The lady, whose name was Robyn, was also there for Crypt Of Tears, and afternoon a couple of minutes I discovered she was a fan, as in fannish, though I don’t know if she goes to conventions. But we were yakking away about fannish stuff and favourite films and shows and books, and she, like me, enjoyed both crime fiction - British - and SF/F, including Doctor Who(her first Doctor, like mine, was William Hartnell, and she collects the DVDs). Her daughter arrived and she couldn’t even wait for the complimentary glass of bubbly; she bought them a glass at the counter! I picked up my free glass and found that I was able to drink it without getting fuzzy, as I usually do, after filling my stomach with food. However, I only drank a half before we proceeded into the cinema. I didn’t want to fall asleep.

The film had a couple of murders and a lot of riding around on camels and zooming on motorbikes. Despite the London setting of some of it, the London scenes were filmed right here in Melbourne. I recognised the English mansion as Werribee Park, and some of the internals were filmed at Ripponlea, a stately home not far from where I live. They have used Ripponlea before, but I didn’t recognise all of it; a lady I met afterwards at the tram stop said that she works there and the ballroom was the Ripponlea ballroom. I may even have been there once, for a reception, but it has been a very long time!

“Jerusalem” and the “Negev Desert” were filmed in Morocco. I’ve been to both places and realised early on that they were not what they were supposed to be. I do remember a sandstorm - there were two in this film and, yes, they can whip up very quickly. And I remember one night in a bus between the Negev cities of Beersheva and Arad seeing a man step off in the dark and walk confidently into the desert.

I did wonder if there could possibly be an emerald as huge as the one shown in the film. I’m talking a polished gem around 30-35 centimetres long. Maybe an emerald expert reading this can tell me? Also, a dead body over 2000 years old who looked merely asleep. Apparently she was preserved in honey? I’ve never seen a mummy that good, even preserved in a desert climate.

No matter - it was fun, and afterwards, it was raining, but I caught the tram soon.

An enjoyable evening - and tomorrow I get to hear Neil Gaiman!

Posted by Sue Bursztynski at 4:02 AM

The worst part about historical TV programmes or films is when the creators are young people and don't get the costumes or language right for the era. Fortunately Miss Fisher in the tv series looked and sounded spot on.

Hi Hels! In fact, when I was waiting in line at a book signing, the old gentleman in front of me said he was brought up in the 1930s and the books were accurate. They took a lot of trouble with the TV show. Some of the material they used were original, including Phryne’s dressing gown and the buttons on Dot’s cardigan. I went to the original exhibition at Ripponlea. It was breathtaking! There is another one coming up soon. I’m definitely going!