Two Rereads And A New Book!

I’ve just finished my reread of the wonderful The Dark Is Rising by Susan Cooper, which I started as a Christmas Eve read. Strictly speaking I should have read it over the Christmas and New  Year period, from Midsummer Eve(Southern hemisphere!) to Twelfth Night, when the novel finishes, but I just can’t defer gratification! And I have to say, it delights me just as much on my umpteenth read as it did the first time, even if I have spotted a few glitches. If you want to know what they are, check out my post from this time of year in 2017, and see what you think.

The other reread was of a novel I haven’t read since just after it first came out, Anansi Boys by Neil Gaiman. The author had been in Melbourne for a convention I was attending, and read us bits from it. I’d just read American Gods. And I’ve  reread that one recently too, as well as watching several episodes of the TV series on my streaming service. (I haven’t seen the whole series, since a browse of the episode details told me that after sixteen episodes they still hadn’t finished the novel!). So I thought, what the heck, and downloaded Anansi Boys and thoroughly enjoyed it all over again. I’m thinking of downloading the radio play, in which Lenny Henry plays a role.

Is it a sequel to American Gods? Sort of, I’m pretty sure it’s set in the same universe, but you can read it stand alone.

American Gods featured battles between the old gods, who had been brought to America in the minds of their believers, and the new ones, such as Media and Technology. One of the characters was Mr Nancy, who was an African spider god and trickster figure. At the start of the second book, Mr Nancy has been living in Florida. He is a charming, basically kindhearted person who likes women, plural, but they also like him; he makes them feel good about themselves. He has died, falling off a stage while doing karaoke and grabbing a woman’s breasts as he falls. His son in England, known as Fat Charlie( he isn’t fat) has been living a dull life as a book keeper for an entertainment agency. He is  about to get married, but is likely to acquire the mother in law from hell.

Travelling to the US for his father’s funeral he meets four elderly - magical - African American ladies who were his father’s friends, and finds out that he has a brother, who was sent away when he was very young. All he has to do to meet him is tell a spider, which he does - and regrets it. The brother, Spider, inherited all the magic, it seems, and, worse, all the cool. In the course of a few days he has taken over Charlie’s job and his fiancée ...

I won’t tell you more; if you haven’t read it, time to grab yourself a copy, with or without the previous book. It’s funny and sweet - and oddly reminded me, in some parts, of Thorne Smith, a 1920s author who wrote the Topper stories(a bank employee haunted by the ghosts of a married couple)and Turnabout, in which a husband and wife swap bodies. 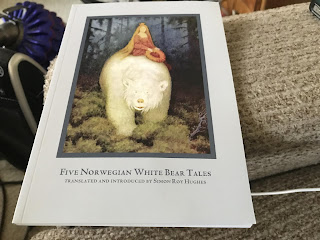 Yesterday I got home to find a brand new book waiting, which I’ve started reading. Five Norwegian White Bear Tales is a set of variations on “East Of The Sun And West Of The Moon”. It was translated and edited by Simon Roy Hughes, a folklorist who lives and works in Norway. He used Kickstarter to fund it, and it has certainly been worth the wait. It’s a slim volume, but one of the stories in it has never been published before. There is an interesting introduction which explains where the stories in the book were first published and talks about the folktale “type” which is connected to such stories as “Beauty And The Beast” and Lucius Apuleius’s “Cupid And Psyche” which was a part of his novel The Golden Ass. At least one folklorist thinks they all come from “Cupid And Psyche”, but Mr Hughes doubts that all those folktales could come from a single work by a known author. He also suggests that there were earlier versions.

Anyway, I’m glad I bought into this publication. If you want to read more of his translations he has a blog, here. https://norwegianfolktales.blogspot.com/
Posted by Sue Bursztynski at 9:14 PM

All of the books that you mention sound good. I have yet to read Neil Gaiman but I really need to get to him. I will likely start with American Gods

I have also not read The Dark is Rising. That also sounds like it is well worth the read

Hope you enjoy them! Neil Gaiman is well worth reading, whatever you start with.

How did you hear of the Norwegian book, Sue? It seems very niche, but interesting.

I follow Simon’s blog. I’m a big fan of folklore, and the blog is largely his translations of various Norwegian stories.

Anansi Boys is such a good choice - one of my favourites of Gaiman's works. I haven't heard of Five Norwegian White Bear Tales but I love folklore so I'll have to track it down!

Hi Melanie! Are you on Twitter? The translator/publisher is Simon Roy Hughes, who tweets under the handle @SimonRoyHughes - he would give you the details, or follow my link to his blog, it’s bound to be mentioned there, plus plenty of other folklore. You can’t buy it in the shops, I don’t think, but certainly worth chasing up.