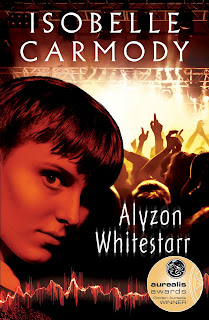 Teenager Alyzon Whitestarr lives with her large, loving family. Her mother is a vague, dreamy painter, her father a brilliant musician and composer who is in a small band. After an accident in which she gets a bad hit on the head, she awakes after a month in a coma to find her senses have been extended, though her sense of smell is strongest. Everyone around her has a signature smell, one which tells her whether or not to trust them, whether they are worried or stressed or simply an evil person. She makes new friends through this sense of smell and discovers that there is something truly horrible about the school heart throb, a boy on whom she used to have a crush.

And then there’s her family. One of her sisters, Serenity, who now wants to be called Sybl and wears black, has a secret that greatly worries Alyzon. Her father, a truly gifted musician and a kind, loving person, has been approached by an entrepreneur who is known for hanging out with artists who... change. With her new friends, Alyzon must find out what’s going on before horrible things happen to her loved ones - and others.

I missed this book when it first came out from a big publisher in 2005, but was allowed to go out of print. This is a revised edition, put out by Melbourne’s Ford Street Publishing in 2016. I bought my copy at a Ford Street event last week. I have found myself reading it even at night time, in bed, when I usually prefer to read familiar comfort reading, to help me sleep. It’s a very exciting read! Admittedly, there are long passages where the characters stop to discuss what they might be fighting and how it works, because there is something more to Alyzon’s extended senses than being able to work out who to trust and who not. Something nasty is using people’s vulnerability to infect them with anger, hatred and despair, and get them to spread the sickness.

It’s interesting- and unusual - how many older, even adult characters play a role here. A young technical genius called Raoul is still older than the others in Alyzon’s group. He drives and has quite a lot of money from his work. That’s helpful to the mystery they are all solving. Alyzon’s father is a major character in the story, though not involved with what his daughter and her friends are doing. There is a very dramatic climax near the end, which happens during a concert in which he is performing.

The characters are well worth caring about. Alyzon’s family are close knit and she is able to find pity even for some of the villains, once a touch has brought a flashback that explains  some things about them.

If you’d like a print copy, the Ford Street Publishing website should have it. You can find an audiobook version on iBooks or Amazon, read by the author.

Posted by Sue Bursztynski at 4:36 AM

This sounds really good. It's a great twist on someone who could read minds.

Hi Sue - it does sound a fascinating book - a really interesting take on life ... thanks I hope to read it one day - cheers Hilary

This sounds fascinating. I've got another book to read which uses senses (taste) that has just been published "City of Lies" by Sam Hawke.

Yeah, she is (a fellow Canberran actually). I haven't read it yet because Heckle saw it on my desk the day I got it. He read the blurb and took it to read himself.

Let me know how it goes when you do read it. Canberra has a lot of speculative fiction writers.