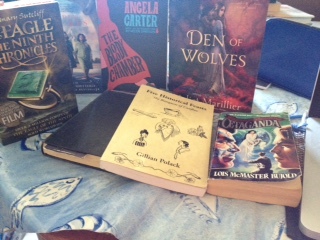 It's nearly March 8 - gotta post about International Women's Day! Only once was I working at a girls' school at this time of year. I remember they got the kids to choose a woman from their national background(it was a multicultural school, like the one I have worked at for the last 20 years). One girl had a German background and didn't fancy Marlene Dietrich, as her teacher suggested, so when she came to do her research in the library, I suggested Hildegard of Bingen, "the sibyl of the Rhine", a 12th century abbess who composed gorgeous music we still hear, did science stuff, wrote at least one play that I know of and terrified the Princes of the Church. The girl liked that one and chose her. On the special day, we all went down to Richmond Town Hall, where the girls got up and talked about their chosen heroines. It was fun!

Sunshine does Harmony Day, but not IWD.

So, thinking of this post, I decided to just pull a few women writers from the pile by my bedside. Some I have read over and over.  Others I'm still checking out.

Left to right: The Eagle Of The Ninth Chronicles, by Rosemary Sutcliff. Actually, there are only the original trilogy in this book - The Eagle Of The Ninth, The Silver Branch and The Lantern Bearers. There is another one, Frontier Wolf, which is set between Silver Branch and Lantern Bearers. It must have been written later. These are classic children's books by one of the greatest children's historical novelists of the 20th century. The young hero of the first book, Marcus Flavius Aquila, goes on a quest to find out what happened to his father's legion - and their Eagle standard. He ends up settling in Britain and the rest of the series is about his descendants. You know who they are, even when they no longer have the Roman name, because there is this flawed emerald ring being passed down through the generations.

Semi-hidden behind that is Hidden Figures, by Margot Lee Shetterly, which made a helluva movie, about black women mathematicians behind the early space program. It's not a novel, it's non-fiction. A wonderful book!

Next, Angela Carter's short story collection, The Bloody Chamber. The title story is based on Bluebeard, set in Brittany, but not in the Middle Ages! She also wrote Company Of Wolves, her take on Little Red Riding Hood. That was also a film, which I vaguely remember had Angela Lansbury as the grandmother.

Next to it is Den Of Wolves, the third in the Blackthorn and Grim trilogy. In it, we finally find out who Grim really was before being thrown into that prison where he first met Blackthorn, the heroine, and we find out why the elven lord is looking after her. And I have to say, it was a beautiful trilogy from a lady who can make fairytales sing!

Lying next to Eagle is a book you will have to take my word for, as it hasn't got a dustjacket. It's Annemarie Selinko's Desiree. I have to admit I know very little about the author, apart from this Wikipedia entry. She did write other books and a couple were turned into films, yes, but nothing in English. This niovel became a film with Jean Simmons and Marlon Brando. It's a delight! The heroine was a real person, though from what I have read of the real Desiree Clary, who was a very strange woman, I think I prefer the one in the novel. The novel covers the time from her becoming engaged to Napoleon till she becomes Queen of Sweden, with her husband, Jean-Baptiste Bernadotte as king. It's in the form of a diary and is - utterly charming! Read it if it's still available!

Five Historical Feasts is written by historian, keen cook and SF author Gillian Polack, with some connected short stories at the end. It tells of all the work that went into researching, designing and testing the food for five historical banquets held at Canberra's annual science fiction convention, Conflux. It's a fun read, especially as I have been to one of those banquets, the Regency one, when it was repeated a few years ago. There are recipes interspersed with the story of the work done for the banquets. I think you might still be able to get a copy at Australian SF conventions, but be quick - Gillian tells me they are unlikely to reprint, due to copyright matters on the art.

My copy of Lois McMaster Bujold's Miles Vorkosigan novel Cetaganda is almost falling apart from reading and rereading, but I can't help it - every time I finish I just have to promise myself a reread to cheer myself up for having finished it! Miles gets to solve a mystery while on the planet Cetaganda for a royal funeral, and we finally see what it's like. The inhabitants specialise in genetic engineering and women are in charge of the planet's gene banks.

Well, there are a few books by women that have delighted me! What about you?

Posted by Sue Bursztynski at 4:47 PM

The Company of Wolves was a novel!? When I was younger, that was my number one favorite movie. I need to check the book out for sure.

Some of my favorite women authors include: Barbara Kingsolver (The Poisonwood Bible, The Lacuna), Ann Patchett (State of Wonder), and Jodi Picoult.

Hi Sue - thanks for these ... I'd like to read them all ... I had Hidden Figures back in England ... so perhaps can read it here. I had a look at Hildegard in Wiki - and though I'd known about her ... I hadn't realised how much she'd done during her life. Cheers Hilary

Tamara - actually, Company of Wolves was a short story. It’s in the same volume as The Bloody Chamber. I suspect you will find in not much like the film.

Hilary - hope you find all those books. I don’t think you’ll have much trouble. I bought mine I; ebook, then someone gave me a print copy for my birthday. Yes, Hildegard was amazing! If she’d been a man we would have called her Leonardo. I think the term is “polymath” - a bit early for Renaissance woman. ;)

Oh, what a WONDERFUL post!! I feel bad that I didn't post anything for International Women's Day....but I just didn't have the time.

You have mentioned some really interesting books here! I'm not familiar with all of them, but I will certainly find out more about them!

I HAVE heard of Hildegard of Bingen, and have been wanting to read her work for the LONGEST time! It's AWESOME that you've mentioned her! <#

I saw the movie for the book "Hidden Figures", and it just BLEW ME AWAY. I now own the book, and do need to read it.

Thanks for sharing!! Thanks as well for commenting on my "Can't Wait Wednesday" post!! Hope you're having a GREAT Sunday!! <3 :)

Thanks for your lovely comment, Maria! I think you might have a better chance of hearing Hildegard’s music than reading her work - and enjoy it more. There are plenty of recordings, easily available. I have a couple of them myself. It’s religious music, of course, since she was a nun, but it’s amazing to sit back, shut your eyes and hear the sounds of women from hundreds of years ago... The music is very beautiful.