Look What I've Got! Some SF Classics 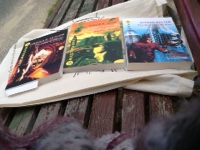 It's Sunday. I decided to wander down to Acland St, my favourite street in all of Melbourne, for a falafel and a haircut, if I could get one. The haircut has to wait fr tomorrow, but I had my late lunch and an ice cream and entered the local Reading's Bookshop.

They were selling SF Masterworks for three for the price of two. Some I already have, in print or ebook, but I haven't been able to get hold of Alfred Bester's The Demolished Man on iBooks, alas!  And I want to read it. It's where the author of Babylon 5 got his idea for the Psi Corps, which is led by a man called...Alfred Bester. The role was played by Walter Koenig, whom we know best as Ensign Chekov of Star Trek. He made a very impressive villain!

I think I have a battered old copy of Ursula K LeGuin's The Lathe Of Heaven somewhere, not sure where. It will be fun to reread. It's about a man who dreams true, in the sense that when he has a true dream, he wakes up and finds that it has happened and nobody remembers it ever being any different. There was a telemovie of it which I saw at Cinecon, the convention where I was lucky enough to meet Robert Bloch.

And I hadn't realised that Do Androids Dream Of Electric Sheep? was so short. I shouldn't have any problems getting through it. I hear that Bladerunner is very different, but it is a classic in its own right and I read a rave review of the sequel online this morning, only it didn't tell you anything about the film except the basic blurb, because literally anything else you might say is a spoiler and the journalists all had to sign something promising not to give it away. All this one would say was that it's even better than Bladerunner. We'll see about that. I'm hoping I can arrange to see it with my friend Bart; Bladerunner is his all-time favourite film.

Meanwhile, I have a nice haul of books!

Posted by Sue Bursztynski at 9:52 PM