Final Day At The Writers Festival!

Well, I went, as planned. But I left later than intended, so missed those 11.30 sessions I was debating with myself about attending - the one with John Safran? The one with father and daughter team Thomas and Meg Keneally? I had opted, in the end, for the Keneally session, but it was too late - I reached the city about twenty minutes too late for either session. My own fault, I was a bit slack.

However, I was glad in the end - I at least downloaded the new Safran book and bought Volume 1 of the joint historical crime series by father and daughter Keneally, and was just in time to have it signed by both authors. Mr K, about to pack up for lunch with his daughter's publisher, promised to wait till I returned from the book stall. Very nice they both were, and they expressed genuine interest when I mentioned I had a book blog. I grabbed a pen and envelope and wrote down the URL, and will be reviewing the book when I've finished. I've started and am enjoying it so far. It seems to be a murder mystery set in the Port Macquarie penal settlement. Lovely!

So, why am I glad? Well, before I left home, my nephew David rang to wish me happy birthday and told me that his brother, Mark, would be going with his delightful family to the Harry Potter event. His elder son, Eden, is reading the series now. He is eight years old and is nearly finished Goblet Of Fire! I've told him he is getting a copy of The Hobbit from me when he has finished the series. If he can read a YA novel like Goblet, he can certainly handle The Hobbit.

So, both boys wore a bit of basic costume, although Jonah didn't want to participate in the costume parade. There were trivia questions from the stage - Eden did put his hand up, but was never chosen. Still, he had a great time and he did get a chance to be "sorted" by the lovely Sonia Palmisano from Bloomsbury, who gave me a hug. Eden is a Ravenclaw(he plays the piano).

After it was over, they left. I had lunch, then returned for my one and only session, which was about the LoveOzYa anthology. There were five authors, including the editor, Danielle Binks. There was Alice Pung, Amie Kaufman, Melissa Keil and Ellie Marney, whose short story was actually based on a chunk she had chopped out of her first novel about the youthful Holmes and Watson-type characters. I bought two copies, one for me and one for the library, because young Raiesah of Year 8 had asked for it. "All those great authors!" she enthused.

I've read the first story, "One Small Step" by Amie Kaufmann, who explained yesterday that she had got the idea from two sources: firstly, from overhearing some Year 12 students talking about what they wanted to apply for as opposed to what their parents wanted, and secondly from the story of the world's first IVF baby, who had had to put up with the whole world  wanting to know about milestones in her life. It's about the first baby born on Mars, now seventeen and having to share her life with the entire population of Earth. Oh, and she falls in love with another girl, her best friend.

I've just started the next story, which is by Will Kostakis. Will wasn't part of that panel, though. It was all female. In fact, eight of the ten stories in the anthology are by women - the other man is Michael Pryor. However, the purpose of the anthology, as Danielle Binks explained, was that in the ALIA survey of most-borrowed books in Aussie libraries, only two out of the top ten YA books were by Australians. So this one is for Aussie voices, though of course, they have every respect for overseas work. Last year, we were told glumly, not one of the top ten were local. 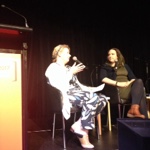 I'm hoping to read the whole book this week, so I can suggest it for next year's English text. The stories are unfortunately a bit long for "short story" work, but so far, quite readable and not too dreadfully hard for our weaker readers. And there seems to be a variety of genres, which is good. 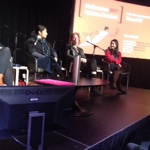 Anyway, a nice day out!
Posted by Sue Bursztynski at 2:49 AM

It's great that your nephew? reads so much. My oldest daughter was a voracious reader until I made the mistake of getting her an ipad mini. Goodbye novels, hello YouTube. What was I thinking?

Yes, Eden loves books. He doesn't have his own iPad, but he has access to on line games if he wants them. I'm sure your daughter will re-discover books. Maybe get her an iTunes voucher and point her at iBooks? :-)