In Which I Time Travel...In More Ways Than One: The Early Arts GuildPerforms!

Today I was supposed to be attending a friend's Christmas party. Poor Gaye rang me last night to say she had a nasty cold which she didn't want to spread. I regret her cold, but not the party, which will be on next weekend, or I could catch up with friends to give them their gifts, if it wasn't. 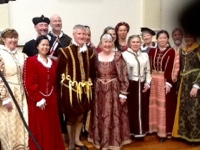 Meanwhile, I had another option this afternoon: to attend the the annual Christmas concert of the Eaely Arts Guild. I receive their newsletter, because some years ago I was learning Renaissance Dance from Helga Hill. I was, let's face it, not very good and eventually dropped out to try belly dance. I was a little better at that, though not brilliant, but my first teacher stopped teaching to focus more on her nursing day job, the second one, who was very good indeed, moved to the other side of town, where I couldn't follow her, and that was that. I did try another couple of teachers, but neither was anywhere near as good as Samra. There was one who had taught herself dance through videos!

Helga Hill is a huge expert in the era of the Renaissance and the Baroque. She is an historian, a dancer, a musician with several instruments under her belt, a translator and makes the costumes, which are utterly accurate, from her research. She used to travel to Europe every year to read manuscripts and learn even more.

I was never really good enough to perform, but she was kind and let me have a go at some simpler dances and the rest of the time I acted. I was a Duchess watching the dancers perform in my honour, a Commedia Del'Arte-masked clown called Clod, a lady in waiting watching the dancing with the king and, once, a lady embroidering at the bedside of the dying Queen Elizabeth while her life was played out in acting and dance below.

It had been years since I'd seen Helga or her husband Mark and it was such a pleasure to see them again. I ended up buying a copy of Mark's local history book about Gippsland and their CD, which is playing on my CD player as I write this post.

The performance was wonderful as always. There was dance and music and a narrator and a wonderful soprano who also had learned the art of gesture. That's a very precise art, which we learned a little about when I was there, Only one dancer of today's troupe had been around in my time, Jan. I didn't get a chance to talk to her, but at intermission I approached Helga, who was pleased to see me and gave me a hug.

I really must make the time to go to other concerts next year. I kept having clashes thus year.

After interval there was some Baroque dance by two dancers, both women, though one dressed as a man, complete with Van Dyke beard! It's always the same in that case - not enough men. Only one this time. And Baroque is a much more difficult form of dance than Renaissance, trust me on this!  We learned one Baroque dance when I was there - and that was one of the simpler ones. So these two were clearly the most advanced members of the team. 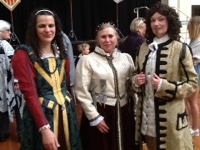 That's a Baroque costume on the right.
The man is a lady!

The concert finished with bell ringing. That's something Mark used to teach years ago, but he has not been well lately, he was just out of hospital and on a crutch.

It was a lovely end to a delightful performance.

Learning Renaisance Dance was not just because I was interested in it. It was all a part of research for my writing. Did you know that there are very few medieval dances we know? That's because they weren't written down, or at least we don't have any dance manuals that might have been written at the time. So Helga focused on the later eras, for which there were manuals.

Mind you, there were some earlier dancing masters we know of, just before the Renaissance. One of them was a Jewish lad from Pesaro called Guglielmo, of whom it was said that he could have seduced the goddess Diana. That's how gorgeous he was. There's a painting of him dancing between two young ladies, his students. He was respected enough that he didn't have to wear Jewish identification(you think the Nazis did this first?). On the whole, though, Italy was not a bad place to live if you were a Jew in the arts - and most of them were. It was expected of the kids that they learned music, dance, acting, whatever. We don't know what happened to Guglielmo, though there's a theory he may have converted to get a job he wanted. Oh, well... I wrote him into a story once, a Mary Sue, of course, in which the teenage girl met him at the school dance and found herself back in his time briefly, dancing with him... No, I never even tried to sell that one! 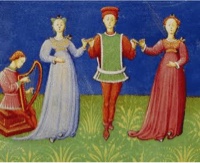 Guglielmo with his students.
Public domain

Anyway, I learned enough to help me with my historical fantasy; I've never regretted my time with the Ripponlea Renaissance Dancers.
Posted by Sue Bursztynski at 2:37 AM

Hi. I finally have enough free time to find out how to use this and get onto your comment thingy.