And to me also, but that's another story.
By the way, it's also the birthday of the guy who invented the safety match - a great thing, but he made very little money out of it, because the damned things were too expensive for the average person at the time. I guess you can't expect a scientist to also be good in business.
For those of you who aren't Australian, Andy Grifffiths, Aussie children's writer, has no connection with an American actor who had his own TV comedy show in the 1960s - about the only thing they have in common is being funny, and believe me, Andy Griffith was funny in a very different way!
Take a look at this.

It started as a short story in which a boy's backside ran away and had to be persuaded to come back after a wild chase through the streets of Melbourne. I think the US edition of the book was called The Day My Butt went Psycho, because in the U.S. a "bum" is a tramp.
This writer and his wonderful artist collaborator, Terry Denton, absolutely get that children like their humour over the top. (Paul Jennings does too, but it isn't his birthday...) There's a cartoon flavour about their fiction, where outrageous things happen which the young readers know couldn't possibly happen, but what fun to imagine it!
In the "Just" and "Treehouse " books the characters are named for the authors. In one story that I read with my students around once a year, "Gorillagram", Andy decides to annoy his sister, who is celebrating her birthday in a Lygon Street restaurant by turning up in a gorilła suit. He ends up being hauled off to the zoo, when he can't get out of it.
There's even Just Macbeth, a play in which the characters are preparing for a school production of Macbeth and end up falling into the roles they're playing. I think it was commissioned to get kids interested in Shakespeare, and I can't think of a better way. 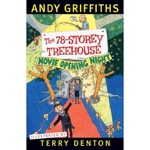 Here's the latest "Treehouse" book, which I'll be ordering for my library, where a sixteen year old student is reading the series. My nephew's seven year old son Eden is also reading the series at the moment. He's looking forward to this one. See? Universal appeal! (Of course, Eden is a very good reader, a couple of years ahead).
We have the Schooling Around series in my library, about the adventures of a class with a delightfully over the top teacher, a bit like the one in Oliver Phommavanh's Thai series, but that teacher is based on himself, and Oliver Phommavanh is every bit as crazy-delightful as his character; this one is even more over-the-top.

And Andy Griffiths is such a nice man! I met him at the YABBA Awards one year(see the post, somewhere under YABBAs) and he was just lovely, and even gave us a set of Schooling Around, which had just come out with a new cover. They are much-borrowed, believe me.
And you know what? I would much rather share a birthday with Andy Griffiths than any World Leader or famous general. He has done far more for the human race than any king or politician or conqueror.
Let's face it, we all need to laugh.
Posted by Sue Bursztynski at 3:29 PM