I had heard about it on line and received an invitation to attend via email.

Okay, a bit like this. A lot less blurry. I really have to stop doing this on my iPad.

Reading's is a smallish chain of bookshops. We have one in St Kilda, the suburb next to mine, although that Reading's simply took over another bookshop, Cosmos, a real independent, and didn't even make too many changes.

But the one in Hawthorn has been there for years. It's in a shopping centre, though it takes a fair while to get there from where I was approaching. I work in Melbourne's west, a fair distance from Hawthorn, but I left work on time to catch a city train and a connection which would get me some of the way there. You can catch the tram from town, but it's actually quicker to take a third transport, get off the train in Balaclava, a suburb along the tram line, and catch the tram another 40-odd stops.

I arrived with a few minutes to spare for the 6.30 pm book launch, greeted Gillian, who had come from Canberra to Melbourne, where her family lives, and Michael Pryor, who was launching the book.

I have taken the image off the publisher's web site - I don't think they'll mind, as this is promotional.

I bought the book. I prefer ebooks these days, but there aren't any at this stage. There probably will be. But I was attending a launch and it seemed silly to have come all that way at the end of a long work day and not buy something! Besides, it would give me something to curl up in bed with.

I have to admit, I was impressed with the look of the book. You can mostly tell a small-press book. They may look beautiful, but they're usually thin and the paper is thick. I guess it must be the way of less-expensive overseas printers. This one looks completely professional. In fact, after selling 29 copies, Gillian told me, the bookshop took several more on consignment. I think they'll sell.

I settled down to the launch - first, the publisher, who has bought four books from Gillian and has known her a few years. Then Michael Pryor, a wonderful writer himself, though so far all his books are for children and teens. As a former teacher, he knows his audience very well. This novel, on the other hand, is about older women. Jewish women. Anglo-Jewish women. Gillian Polack's father's family has been here for many generations, one of twelve Jewish families to arrive in the 19th century. She acknowledges they're a minority among all the rest of us who have come from Europe. And they have a different culture. Despite that, if you saw Gillian, listened to her voice, saw her gestures, you might mistake her for a European Jew. Maybe there are some things that don't change. 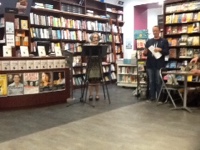 She read some passages from the book, answered some questions and settled down to sign. Again, I rarely bother to get a book signed, because I might not like it and wish to pass it on and then what to do with a book that has a personalised autograph? But I got it signed. And personalised. Gillian was a bit nervous, because I would be able to pick up the Jewish elements. Still, no harm in it. After all, how does she think I felt when she wanted a copy of my mediaeval fantasy novel? She is the expert in that area, after all. 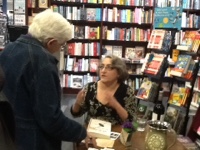 Serve her right! But I've read the first few pages and think I'll enjoy it. I like a book with humorous touches and I think this will be gently humorous, the way I like it.

Afterwards, I went off to supper with two friends from the Nova Mob. Well, I had a hot chocolate as the Greek place where we went didn't have tea, and a Greek rice pudding. I had eaten on the train on my way, not thinking I'd have time to eat afterwards. One of my friends had come a longer way than me and hadn't eaten at all.

We were soon joined by Gillian, her family and another fannish friend. I had a lift home and managed to be there by 9.00 pm, ready to have a shower and read in bed.

A good evening all round!

Posted by Sue Bursztynski at 3:03 PM

What a lovely time you had! I think anyone writing a book about Jewish women must know that it will be read by lots of people and, accordingly, make the book accessible to all. It's excellent she sold so many copies. I hope you enjoy it!

If it ever gets to the US, where there is a larger Jewish population than here, perhaps it will sell quite a lot of copies. And, at that, most of us here are from Europe, the Continent, not the UK. Still, Gillian is quite well known here in SF fandom, as well as for her academic reputation. I'm sure it will do well for those reasons, plus the quality of the writing.

Thank you so much for your thoughtful comments and for being so wonderfully supportive. It makes a big difference, especially this year when my life has been curious and interesting.

On a semi-related note, I'm really glad that my confusion over dinner meant I got to see you. I thought Wendy had booked a table somewhere and that her students were coming! but they changed their minds and she had to leave early. I admit I saw you and the Bruces and that's why we stopped where we did. We could just have all gone together!!

Gillian, thanks and welcome to my blog! Yes, your life has been interesting in the Chinese sense this year! "May you live in interesting times." Um, no thanks! Glad it's improving.

It was a delightful evening and I'm glad I went. You have a nice family and your Mum's biscuits were yummy.