Unofficial A-Z Challenge: P Is For Pearce, Q Is For Quirky Aussie Law

P Is For Alexander "Cannibal" Pearce 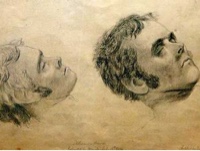 In 1822, eight convicts escaped from the same horrific Tasmanian penal colony as Matthew Brady(see B Is For Brady post). Only one survived, Alexander Pearce. Until then nobody had ever escaped - in fact, it was this escape that inspired Matthew Brady and his friends to have a go.

So, these convicts escape. They spend nine miserable days in the bush and finally run out of food. They don't know how to hunt the local wildlife. Someone jokes that he is hungry enough to eat a man... They begin to kill and eat each other. Two run off, but die of exhaustion. When only two are left, Pearce kills his companion in his sleep and leaves with some bits of him.

Eventually he is caught and taken back to jail. When they ask him where are the others, he says he ate them. They don't believe him. He escapes again, with a young boy - and by this time he's hooked on human meat. He's caught again, this time with bits of his companion. This time they believe him and he hangs. But the convicts now know escape is possible...

Q Is For Quirky Aussie Law

While researching Crime Time: Australians Behaving Badly, I read somewhere that there had been a loophole in Australian taxation law that allowed crooks to claim their guns and bullets on tax, as tools of their trade. I'm assuming  this loophole was closed; I never did find out if anyone had actually tried claiming, though you do have to wonder who suddenly noticed it. Was some legal nerd reading the taxation laws one day and cried out, "Hey! This is weird!" or did some cheeky criminal try it?

If you have enjoyed these stories, why not check out my publisher's web site, for Crime Time: Australians Behaving Badly and other great books?

A free chapter sample is here.

Tomorrow: R Is For Snowy Rowles
S Is For Ikey Solomon
Posted by Sue Bursztynski at 1:27 PM