However, I wrote a children's book on crime a few years ago, Crime Time: Australians Behaving Badly, so I know something about this subject without having to do any further research. So I thought, why not give you some snippets of the more entertaining stories I told in that book? A to Z! And that will be my theme for this - unofficial - A-Z Challenge.

I won't be writing anything too long, just a few lines. It will be fun to see if I can sum them up for you.

Why a book on Australian crime? Well, Australia did start off as a penal colony. So did the US, for that matter, or at least it was used as one until the British were kicked out, when they had to find somewhere else to dump their unwanted criminals. But there's a rich history of crime here, starting with the Batavia mutiny in 1629; at this writing, there's a film planned about it, with Russell Crowe as the hero and Geoffrey Rush as the villain, though both of them are way too old for the characters they're playing. Still, a good story which has been covered in a lot of fiction(and in my book). The first crime to happen in the new colony after the First Fleet arrived was only two weeks later - and on the way to Australia, a convicted forger used his skills to forge money to buy goods on the ship's stops.

We have the whole bushranger culture. Yes, every European-based country has its own history of robbers, some of them romantic, but ours are argued over and written about to this day. Ned Kelly - hero or baddie? We still argue. And Redmond Barry, the judge who sentenced him to death, is still vilified for it, forgetting the fact that he also started the State Library of Victoria and gave away a lot of his wages to the poor. Ah, well.

A is for April Fool's Day Stuff-up.

This is one of the more over-the-top stories in Australian crime. I have the full chapter as a sample here. Basically, two idiots, a few years ago, decided to hold up the Cuckoo, a popular restaurant in Olinda, a place in the Dandenongs outside Melbourne. Someone had told them that there would be $30,000 in pickings. Instead, they got away with a bag of stale bread rolls and one of them with a wound in an embarrassing part of her anatomy. 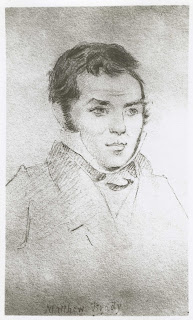 B is for Matthew Brady, Gentleman Bushranger

Matthew Brady was a celebrity bushranger. When he was hanged in 1826, the crowd wept, especially the women. During his imprisonment he'd been sent lots of flowers, food and fan mail. There had even been a petition to save him, to no avail.

Matthew Brady came to Australia as a convict in 1820. We don't really know why - it might have been theft or forgery. Both have been suggested by historians.  He started off as an assigned convict. Assigned convicts were used as servants. Matthew hated being a virtual slave and was un-co-operative enough to be whipped 350 times in a short period, before being sent to Sarah Island in Macquarie Harbour, from which he escaped with a group of other convicts in 1824. They set up their hideout at a place later called Brady's Lookout and became known as Brady's Bunch. (Yes, I know! I didn't make this up)

Why was he so popular? Well, he didn't actually hurt anyone, except one man and that was  a fence who had betrayed him. Even then, it was a year later, when the betrayer was heard to sneer that he knew Brady didn't kill anyone.

His own men never betrayed him, though, even one who had been thrown out of the gang for rape; captured, he was hanged without giving away the gang's hideout.

He took over a house with family and guests, danced with the ladies and sang for them at the piano. A servant slipped away and got help, but he and his gang escaped - that time.

Eventually, with most of his men killed, he was captured by one John Batman - yes, that John Batman, the one who remarked that a certain spot by the river Yarra might make a nice place for a village. He was a bounty hunter at the time. Melbourne was founded by an early Bobba Fett!

On his way to the gallows, Matthew was cheered and pelted with flowers. He bowed to his fans - and died.

Hope you enjoyed this story!

For this book, Crime Time: Australians Behaving Badly, and other great titles, check out the publisher's web site; http://www.fordstreetpublishing.com

Posted by Sue Bursztynski at 4:04 AM

Ive seen the A-Z challenge around but I haven't been able to commit either because 26 posts is a lot and my creativity is shot these days. I never realised that the man who sentenced Ned Kelly also started the state library!

Yes, I thought it was a bit much too, so I decided to just do my own thing, using info I already had. Yes, it's absolutely true about Redmond Barry - most people don't realise it. In fact, before the library was built, he let people come around to his place to borrow books.