Guest Post By G.K Holloway, Author of 1066:What Fates Impose


Today's guest post is by Glynn(G.K) Holloway, whose novel 1066: What Fates Impose I won some months ago on the English Historical Fiction Authors blog.

Glynn has kindly agreed to tell us about how he researched his book and why the period fascinates him so much. It's an era that fascinates me too; the entire history of Europe could have been very different if only a few things had gone differently in 1066. If you think about it, the very English language would have been different, as the Normans, like other invaders before them, brought new words with them to England.
But I'll let the author tell you all about it. Take it away, Glynn!

The inspiration for my novel, 1066: What Fates Impose, came from reading a biography of Harold Godwinson. I’ve always been an avid reader and a history fan and I like to mix up my reading with biographies and novels. I knew something about King Harold from my school days and stories my Dad had told me, so when I found a biography about him by Ian Walker, I was intrigued enough to buy it. I found the book really opened my eyes to the era. Once I’d finished it I wanted to know more, so I read books about William the Conqueror, the Godwin family and then more and more about Anglo Saxon England. I found the history fascinating, full of marauding Vikings, papal plots, blood feuds, court intrigues, assassinations, so much so, I couldn’t believe the story of the era hadn’t been covered more in films, TV and, of course, books. So, I decided to do something myself. I researched everything I could about the period, including court etiquette, sword manufacturing techniques - everything. I also visited many of the locations that appear in the book, usually on family holidays and once I’d done all that - and it took quite some time - I wove together facts and fiction to produce the novel.
The more I researched the more amazed I became about how events played out. For Harold, everything that could go wrong did go wrong, and I’m not just thinking of the power struggles in the north of England. For instance, Edward couldn’t have died at a worse time. For William the opposite is true; even when he has what appears to be bad luck, things works out for him or he makes them work. One of the times I’m thinking about is when William first sets foot on English soil and falls flat on his face. He stands up with two hands full of soil and says, ‘By the splendour of the Almighty, I have seized my kingdom; the soil of England is in my own two hands.’ You have to admire his quick thinking. But it’s not just one or two things, there’s a long, long list of things both in England and on the European continent that fell into place for William. To top it all, a comet even puts in an appearance!
When writing the book I decided to stick as close as possible to the events and be as true to the characters as possible. For me, it’s important to get the research right, so the reader has confidence in the story, knowing what they’re reading is the real thing. This is why Lady Godiva doesn’t ride naked through the streets of Coventry. It never happened. Besides, there was enough going on at that time for me not to have to add any additional spice to the story. Most of the events depicted in my book really happened with perhaps, one or two exceptions or manipulations.
How to present the story was another matter. I wanted the story to be as accessible as possible,  so the idea of writing in some sort of pseudo Shakespeare didn’t appeal. It was no use writing in Old English because for one thing I don’t speak it and for another neither do many other people. Those who do are already familiar with the events. So, I thought I’d use modern plain English and keep out as many anachronisms as possible. No one says, ‘OK’ or ‘Hi there’.
I’m very fortunate in having a wife who is so supportive and in a position to help as our children were still quite young and they were going to a child minder in the holidays and after school. When I left my full time job I was able to look after them at home. My wife has her own business; she is a tax consultant. This enabled me to work part time in her business and part time on my book. The money we saved on child care and employing someone in the business balanced out favourably. When the novel was completed, it ran for 297,000 words. An editor suggested cuts – a lot. So, many months later, I had a finished novel that ran to a mere 160,000 – almost a short story. I’m now working on a sequel.
I’ve explained briefly, what made me write the book but why would anyone want to read it? Well, the era is, I think, very exciting and the Battle of Hastings was such a close run thing - so close that if it had rained that day, William would probably have lost the battle. Some people might think, ‘So what? A fight in a field a thousand years ago on the other side of the planet; what difference does that make now?’
Well the answer is, think how much the outcome changed England’s history. In the mid eleventh century England had been just one of the kingdoms in Cnut’s Empire, which included Denmark and Norway. England looked to the north and was part of the north. The language and culture were very similar. England did not look south for ideas or inspiration and did not get involved with southern European affairs. After Hastings all that changed and for centuries England and France were at each other’s throats.
Some say that if it hadn’t been for the Normans, England would never have risen to prominence. If that’s true, there may never have been a British Empire. If it isn’t true, there might have been some sort of Nordic Empire that spanned even more of the world than the British ever did. 'What if the Normans had lost?'  is a very big question and that’s why I’m writing a follow-up. A Norman victory changed England for ever and consequently had ramifications that echo on through the centuries. It has to be an interesting story.

Bio
G K Holloway was born in a small anonymous town in the north of England. On leaving school he worked in a variety of jobs until he arrived at his mid twenties and decided it was time for a change.
Having always liked history, he thought he'd enjoy studying the subject for a degree, so enrolling in evening classes at his local college to take O Level and A Level courses, seemed the obvious thing to do.
After graduating from Coventry,  he spent nearly a year in Canada before returning to England to train as a Careers Advisor. After qualifying, he worked in secondary education before moving onto further education, adult education and eventually higher education. 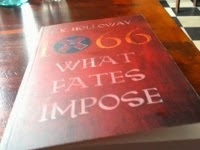 Posted by Sue Bursztynski at 2:06 AM