I've always loved the sensawunda of space fiction. As the years have gone by, I've absorbed science fiction and seen it become science fact.

And now the Rosetta mission is complete and the probe Philae is aboard comet 67P! Mind you, the latest reports say that the battery won't last much past Saturday, due to the fact that it can't recharge(they were explaining this on the radio ths morning, something about the battery being solar, but it's not able to access the sun... So, little probe that has been travelling all these years, take pictures while you can!

Speaking of science fiction(I was), I recall that Arthur C Clarke's novel 2061 began with a spaceship on its way to land on Halley's Comet, only it's not a probe, it has people aboard. There were, as I recall, monoliths involved somewhere in it. But that is what I remember. I borrowed a friend's copy, so haven't looked at it in years.

Amazing what Arthur C Clarke thought of. I like his short stories better than the novels. A while back, when I won a $25 Amazon gift voucher, I spent part of it on a couple of Clarke collections. I'm still making my way through them; Clarke is a writer whose work you savour.

Did you know 2001 started with a short story, "The Sentinel"? The film didn't have much in common with it, just the moon and the monolith. Space travellers on the moon find a monolith. They touch it and that sets it off. They figure it was set there by aliens to tell them when Earth finally made it to space. The question is - will they come and give us lots of goodies or will they come and wipe out the potential threat? As it was, it might have made a nice episode of Twilight Zone or Outer Limits.

But Hollywood did more - far more - with it.

Well, we still don't have the kind of casual spaceflight shown in Clarke, but events like the comet landing show we're getting there. I am so very excited! 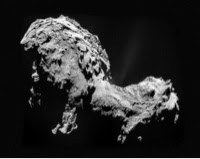 Posted by Sue Bursztynski at 9:18 PM