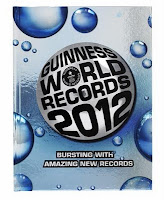 If all else fails in my library at lunchtime, the kids get stuck into World Records. There’s something addictive about looking up the biggest this, the longest that and continuing onto the most of the other. Once you start... And isn’t this year’s looking gorgeous, with a cover featuring striking holographic bubbles and colourful photos throughout, showing the bizarre zany things people do just to get in. I mean, come on - most swords swallowed underwater? World’s tallest lederhosen? There are also plenty of educational items in there, such as information about the continents and bird migrations. My own favourite, for personal reasons, is the title page, which shows the largest object lifted by helium balloons. It was the house from the movie “Up” recreated for a TV series called “How Hard Can It Be?” The house weighed 1966 kilos and there were 300 helium ballons 10 storeys high. It went up to a height of 3050 metres. It was, in fact, in the newspapers earlier in 2011, just in time to be of use to me, when I was teaching the movie for English. One of my Year 8 students asked, “Miss, would that be possible?” and when I showed her the article she was delighted to see that it was, indeed, possible. Now it’s all there in the Guinness Book of Records and I can show it to my class next year. That’s if the book hasn’t been stolen by then.

Posted by Sue Bursztynski at 9:17 PM