Banned Book Week Video and Me 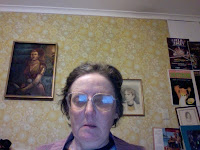 Boy, did I have fun and games loading my first video on Youtube! I decided to read from To Kill A Mockingbird - that wonderful scene where Scout has her first day at school with this pretty young thing just starting out in teaching. I soon found that the two minutes allowed for a Banned Book Week Virtual Readout didn't give me much time to read that scene, so I cut it down to a little snippet which I recorded on Photo Booth. I then followed the instructions and proudly uploaded it as instructed on the Youtube upload page. Er ... yes. It stopped after 40 seconds of the two minutes and when I went to check out the video the synch was appalling. My voice was reading normal speed but the image was rushing along at about a million miles an hour. At this stage I haven't a clue how to delete it, but will do so when I can. Anyway, I then discovered that the .mov format doesn't work well with Youtube. The page suggested that I re-do it as a Quicktime file through iMovie. I did so - and found that I could export directly to Youtube. I followed the link and there I was, large as life and twice as ugly, reading from a banned/challenged book I adore. So here's the link to the complete one and once it's up on the dedicated Banned Books Week channel, you can watch it with all the others. http://www.youtube.com/watch?v=hLfDP6Y7M9E&feature=youtube_gdata_player Have a look at it and a chuckle and then how about doing your own? Mary of Bookhounds tells me this could be an annual event. Wonderful!
Posted by Sue Bursztynski at 6:30 AM