I have just watched The Green Knight on Prime. I wasn’t going to watch it till I had had a good go at selling my Gawain novella, A Matter Of Honour, which I wrote some time ago, but hardly anyone is buying this length right now and those who are don’t want mediaeval fantasy.

So, I thought, the film is there, it has had some great reviews, what the heck. I watched it.

In case you aren’t familiar with the Middle English poem, here goes. 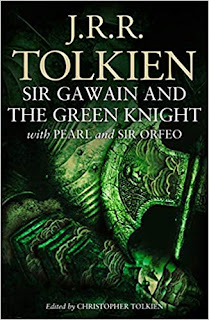 It’s the Christmas season - New Year - in Camelot. Everyone is having a great time. King Arthur won’t eat until something amazing has happened. As this is Camelot, of course, something amazing does happen. A huge green man rides into the hall on a green horse. The man is festively dressed in green and gold, carrying an axe, and challenges Arthur and his knights to a game.

The game? One of them can give him a blow, but must then go to the Green Chapel in a year to receive one in his turn.

After everyone’s startled silence, Arthur - a young man in this poem - grabs the axe impulsively, but his nephew Gawain asks for the honour instead. Gawain swipes the knight’s head off in one blow, but the story isn’t over: the Green Knight picks it up and rides from the hall, his head reminding Gawain that he must come to the Green Chapel now.

The year goes by and Gawain sets off on his quest, pretty sure he won’t be returning. After all, he doesn’t have magic to stay alive after such a blow. He has many adventures along the way, not described, and asks everyone where to find the Green Chapel.

Finally, he arrives at a castle called Hautdesert, where he is welcomed by a cheerful lord called Sir Bertilak and his beautiful wife. The Bertilaks really know how to party, and invite him to stay for the Christmas celebrations.

“The Green Chapel?” says his host. “Oh, that’s just down the road! You can even sleep in on the day. Plenty of time !”

Gladly, Gawain accepts, and also agrees to a fun game. Bertilak will be going hunting for the next three days. Each night he will hand over whatever he gains to Gawain, while Gawain will give him whatever he gets. You’d think after last time he would know better, but Bertilak is such a nice man, so what the heck…

Each of the next three mornings, Bertilak goes hunting and his wife walks into Gawain’s room. She gives him a kiss the first day, two the next. Much to Bertilak’s amusement, Gawain kisses him. The third morning, Lady Bertilak offers him, apart from three kisses, a green belt which will protect him from harm.

Gawain is only human: he passes on the kisses, but not the belt.

On the day, Gawain is guided on his way by a servant who urges him not to do it, and promises to keep his secret, but Gawain’s honour won’t let him. He proceeds.

The Green Knight is waiting for him. The young man stands still to take his blow. The Knight swoops down, then complains that Gawain flinched. Gawain promises not to flinch again.

He starts again. Again he doesn’t take his blow. “Get ON with it, damn you!” yells Gawain.

The third time he does cut Gawain’s neck, but not much. Our hero leaps aside and says, “Right! You’ve had your blow! That’s enough!”

But the Knight has no intention of doing more. Now, he explains: “I didn’t hit you the first two times because you kept your promise the first two days. The third day, you didn’t, when you accepted my wife’s gift without passing it on.”

Gawain is horrified! This scary creature is his jolly host? And yes, he broke his word…

But Bertilak tells him to keep the green belt and invites him back to the castle to enjoy the rest of the festival.

Understandably, Gawain says no thanks, got to go home.

He makes the decision to wear the belt permanently, to remind himself of the time he was weak. Back in Camelot, everyone wears a green belt in support of him. Incidentally, this is mentioned in Phyllis Ann Karr’s novel Idylls Of The Queen. It’s years later, but Gawain is still wearing the now-worn-out belt.

Basically, it’s a sweet story, and a lot of fun, with a young hero who learns about himself.

And then there is the film… not sweet or fun.

It is so very serious and slow-paced. I should add, there are only two named characters, Gawain and his lover back home, Essel(the actress, Alicia Vikander, also played the Lady). Arthur and Guinevere are the King and Queen. Sir Bertilak is just the Lord, his wife the Lady.

Gawain’s horse is also named, though only once, when Gawain cries out his name, Gringolet. (A beautiful animal, though not dapple grey like Gringolet in the poem)

It’s visually beautiful and I can see why the producer director says he was thinking of Excalibur. Dev Patel is a lovely Gawain and our very own Joel Edgerton is a terrific Bertilak.

He isn’t the Green Knight, though. I’d sort of hoped that after the not-very-good Sword Of The Valiant, they might change that back. In that film, Bertilak was a minor character and the Green Knight was played by Sean Connery, who admittedly was perfect for the role. He was a nature spirit, a vegetation god, and … melted into the soil.

In this film, the Knight was created by Gawain’s mother, the king’s sorceress sister, for reasons never explained. Admittedly, in the poem, Morgan Le Fay sets up the whole business to scare Guinevere, no idea why. But Morgan Le Fay is Gawain’s aunt, not his mother.

Towards the end, there was a sequence that made me think of the last few scenes of 2001: A Space Odyssey. I won’t say more, though I still have no idea what was going on in those scenes, and I saw it as a teenager.

So, again, did I like it? I’m not sure. Would I like it better if I hadn’t read the poem? Perhaps. I would probably just say, “Well, that’s a different Arthurian film!” But I have to say, I prefer my sweet and funny poem.

Anyway, if you want to see the film, it is available on Amazon Prime. If you want to read the poem, I recommend J.R.R Tolkien’s translation, which is very readable, and the volume also contains his translations of Sir Orfeo and Pearl, with an introduction by his son, Christopher Tolkien, who edited it. I have read it in the original Middle English as well, but as translations go you can’t do better than Tolkien, can you?

I got my copy on Apple Books, but you can buy it in print as well, and in Kindle, and I see that Audible has it too, read by Monty Python member Terry Jones.that alone would be enough for me to buy it!

Posted by Sue Bursztynski at 3:19 AM

I haven't seen this movie yet, but I do want to see it. I don't expect to understand it, LOL! The original is pretty intractable as to its real meaning so it's no surprise that the film is too (and perhaps even more so). I intend to enjoy its visual beauty and symbolism and not worry too much about figuring it out, LOL! I love Dev Patel and am looking forward to seeing him as Sir Gawain.

Hi Sue - I like your story on the poem - makes it very interesting - excellent to know Christopher Tolkien introduced it. The programme you saw - sounds fairly dire - but you always give us a really interesting post. Cheers Hilary

I've been waiting for this film ever since the first trailer. I read the poem decades ago when I was a teenager And it was Tolkien's translation and I still have my well-thumbed copy - but a pre-Christopher Tolkien-edited edition. This was my second Tolkien text as I first read his essay 'Beowulf: The Monster and the Critics'. LoTR was a later discovery - again I still have my hardbacks from the late 1970s.

So, I have to see the film... when I can persuade my wife to watch it with me.

Hi Debra! Dev Patel is certainly a lovely Gawain! Have you read the poem in the original Middle English, then? I do recommend a translation, though I have read the original for university English. It does make it easier to just enjoy the story, Tolkien’s translation is delightful.

Hi Hilary! The film wasn’t dire, it just didn’t have the cheery charm of the poem for me. I still liked it, I just didn’t love it. But it has had some great reviews, maybe I need a second viewing.

Hi Roland! Maybe you can promise your wife to watch something she enjoys with her, then. Nice to see you are a Tolkien fan from way back! I discovered him as an adult. At uni, it was “What? You haven’t read Lord Of The Rings?” from everyone! So I did. And it’s comfort reading for me now. I binged on his other work.

Hi Anita! Given the theme, Christmas would be a perfect time to watch it.

I've read Sir Gawain and the Green Knught last year for my Christmas reads. Forgot most of it I must confess. And I didn't enjoy it as much as I expected to be honest. Maybe I was tired at the time. I studied medieval literature and actually did my PhD in Arthurian literature, but the French branch.

Hi Guillaume! I only got as far as Honours, but my thesis was on why Arthur started as a hero and ended up as just the guy who handed out knighthoods. It was mostly English, but the French stuff is very different, I think. I’m not a fan of Lancelot! He wasn’t in Gawain And The Green Knight, of course. I’m sorrybyo7 didn’t enjoy that, I thought it was deliciously funny and sweet.