When You Know You Have Made A Difference

Sometimes you make a difference without even knowing it. As a teacher, I know it. It’s not always academically, but when a former student makes it clear they are delighted to see you, you know you’re a success. I’ve had that happen many times, even recently, when I visited my old school, which has been rebuilt, and three young men, now in Year 11, came hurrying up to say hello, beaming away.

And sometimes you find out in a different way. I’m on Twitter. Amazing who you meet there! This guy was never actually my student, though I was working at another campus of the same school. He only knew me as a writer.

In those days, the school had a Principal who respected the library enough to give us an annual budget for a writers’ festival. It wasn’t a lot, but enough to pay some writers to come and speak to the kids. The budget stretched that much further because there were two professional writers working at the school, YA author Chris Wheat and myself, who were happy to do a freebie. We were both at the Senior campus at the time, so we visited the junior campuses to talk. The North campus teacher librarian, Vicki, even organised a book launch for me when my book about astronauts came out.

I don’t remember what the occasion was when I visited the North campus for this particular talk, but there was one student who listened quietly and thought about what I was saying. This was when I told the kids that if you write, you are a writer. I do believe that. So many think if they haven’t sold anything they are merely “aspiring”. No. You may aspire to publication, but if you write, you’re a writer.

It has been many years since then, but he finally made his dream come true and wrote a novel. And on Twitter he told me about it and offered to send me a copy. This is it. The note that came with it was so very touching, I had a hard time not to cry. 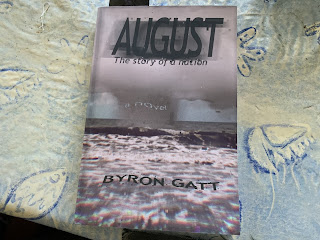 He has every reason to be proud. Too many people just say, “I’d write a book if I had the time,” and bore all their friends with it, but never actually do it.

He did it. And it’s so nice to know that my visit to a school library all those years ago inspired him to have a go!

If you are interested, the book will be available next week on Amazon, in both paperback and Kindle.

Posted by Sue Bursztynski at 2:58 AM

That's so wonderful! We don't get many moments that are so gratifying, so savour this one!

Thanks, Debra, definitely savouring this!

What a confidence building and life-affirming moment you had in his life, Sue. That is brilliant!

Thanks, Anita! I’m very happy about this.

That is a beautiful story, Sue.

When I was in high school, our English teachers tried to invite the authors of our set booklist to speak to the students. Some authors were long dead or had never visited Australia, but I do remember being most impressed by Judah Waten, Thomas Keneally and Alan Marshall. I know how excited your student must have felt.

Hi Hels! Those are definitely some big names in Aussie writing!

Hi Kate! Yes, I think it’s a lovely story. I was needing some good news!

Hi Sue - how wonderful ... and yes heart-warming ... what fun and a delight to know you made such a difference. Cheers Hilary