The Boy Who Stepped Through Time by Anna Ciddor. Melbourne, Allen and Unwin, 2021 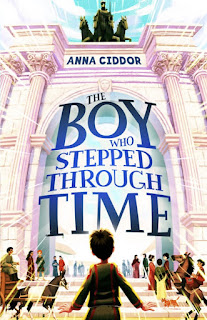 The title of this novel is very suitable. The hero, Perry, literally goes for a walk and ends up in fourth century Roman Gaul. There is a bit more to it than that, but it’s a pretty good description.

Twelve year old Australian boy Perry, in the south of France with his family, is attending a Roman festival in Aix, for which his enthusiastic mother has made costumes. While there, he checks out a display which includes a Roman child’s coffin from the fourth century. Roman children’s coffins included the exact age they were when they died.

Perry goes for a walk, picks up a Roman stylus and writes on the ground with it and...voila! Back in Roman times, at a villa which was only a ruin last time he looked at it. The master is just returning from the north after a long trip and somehow Perry(Peregrinus in Latin) is mixed up with the new slaves who have returned with the travel party. Not only that, but he can speak and understand Latin.

Fortunately, the family for whom he is working is quite nice, and he soon makes two friends, Carotus, a fellow slave, and Valentia, the master’s daughter.

Naturally he spends a lot of the novel trying to work out how he got there and how to get back to his family, but he soon discovers to his horror that the Roman child who died in Aix is someone he knows and cares about. Can he change history before he goes home?

In the course of the story we are taken through some of the Roman agricultural year and festivals. (Perry agrees the Saturnalia is more fun than Christmas) And there is none of this “don’t step on a butterfly” business. It’s not history when you meet and like the people way back when. Perry works hard to find his way home, but also to save the person who is otherwise doomed to die, by finding out how and where it will happen; thanks to the coffin inscription he already knows when.

It’s a sweet story, and charming. It’s not an exciting adventure, but not meant to be. There is no villain, which makes that easier.

It rather reminds me of her other two most recent novels, in which not a lot happens, but we learn a bit of history and culture, very  entertainingly. Somehow it works.

And once again, Anna Ciddor shows her artist skills with the internal illustrations.

The author has done her research, but doesn’t shove it in your face. In fact, her sister, a historian who knows a lot about the era, helped with the research, as did another sister and a nephew. Oh, my goodness, how much work those researchers did!

Well worth a read, for children from about 9-13.

Check out this link from the author’s web site to see what children think of it so far. Hopefully it should be available soon outside Australia.

Posted by Sue Bursztynski at 9:42 PM

I've always been interested in Roman times, especially Roman-occupied Europe and Britain. I like the premise of this book very much!

If you enjoy children’s books, this is a good one!

Hi Sue - this does look fascinating ... and how very fortunate to have so many family helpers! I'll try and look out for it here - and I still need to read your A-Zs ... I'll get there! Cheers Hilary