On Unearthing Another Treasure: Pillar Of Fire by Judith Tarr. 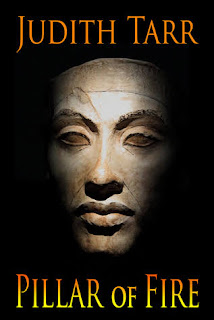 I have been stumbling across books I’ve forgotten I had. This one was on my home book cases, not the ones at my Mum’s place. It was a hardcover copy I bought at a discount bookshop. It was published back in 1995, but you can still buy it at Amazon, print or Kindle. https://www.amazon.com/Pillar-Fire-Judith-Tarr/dp/0312855427 You can also get it in Apple Books. For some reason her books are no longer on Bookview Cafe, though my ebook is the Bookview edition.

This is one of many novels about Akhenaten, the Pharaoh with one god. And I do mean many! Everyone is fascinated by this king, who was a one-off, whom the Egyptians tried to forget after he was dead. From what I have read about him, I don’t blame them. His worship of the sun god Aten was strictly a court religion. He didn’t care if anyone else did, but he closed down the temples of the other gods and moved to a brand new city with his court. That wasn’t going to make him popular.

Before we look at Judith Tarr’s book, let’s check out some of the others.

The Egyptian by Mika Waltari was turned into a film, with Edmund Purdom, Michael Wilding(Akhenaten), Victor Mature, Jean Simmons, Peter Ustinov and many other big names. It presented the heretic Pharaoh as a saintly man who pre-figures Christianity. Unlikely, but you could suspend disbelief for a couple of hours.

Allen Drury’s A God Against The Gods and Return To Thebes were a bit more believable. I think those were my first Akhenaten reads. He is shown as a sort of Egyptian version of England’s Henry VI, a bit of a nut case, not a villain, but definitely not saintly.

There is an Australian verse novel by Dorothy Porter, very readable, seen from various viewpoints.

Howard Fast, author of Spartacus, also wrote a novel about Moses, Moses, Prince Of Egypt, in which Pharaoh’s daughter, Ramses II’s Queen, is a secret worshipper of the Aten, as is a priest who loves her and a couple of other sympathetic characters. Usually the name Moses is connected with a god’s name, but they had hoped that religion would return, so left off the god until they could call him Aten-Moses. I got the impression that the Akhenaten mentioned in this novel was saintly too.

Kerry Greenwood, best known these days for her Phryne Fisher crime novels, wrote one for Clan Destine Press, Out Of The Black Land. This Akhenaten is utterly insane, and Nefertiti has to escape from him. Kerry Greenwood does quite like rescuing characters from the death that history or myth decreed for them. She did that with prophetess Cassandra in her novel Electra. Basically fantasy.

In fact, the only ones I have read that don’t have a fantastical flavour are the Howard Fast and the Drury ones.

Which brings me to Judith Tarr’s book. Pillar Of Fire only has hints of fantasy till the last few chapters, which are centred around the parting of the Red Sea. I’d been assuming that the Apiru would escape via the Sea of Reeds or some such, but no. It became totally Biblical by then.

The story is seen from the viewpoint of Hittite servant Nofret(she has to take an Egyptian name when brought as a tribute and gets used to it). She is the maid of Akhenaten’s third daughter, Ankhesenpaaten, with whom she forms a deep friendship.

The book is based on the theory expressed by some that Akhenaten and Moses were one and the same person. Akhenatenaten is a king who really would have been better off out in the desert as a prophet of his god. Eventually it happens, when it becomes clear that he isn’t going to last much longer as king.

I won’t go into more detail, in case you want to read it, and she does explain her ideas in an intro and a postscript. Personally I don’t think he was capable of fathering sons. I read a bio which suggested that, judging by his statues, which are not idealised, he might have been suffering from a medical condition that makes the man only able to father daughters. As Moses, this version fathers two healthy sons by Zipporah, his desert wife, once he gets away from the incest stuff. Well, we don’t know, of course, and it’s only a theory, but after six daughters by Nefertiti and three more by his own daughters, I’d assume that girls was all he could father!

Anyway, it’s very readable stuff and I enjoyed it, though it did have so much happening in the first half of the novel, over the years.

You can get it in print, if you really want it, on Amazon, but otherwise easily available in ebook on both major platforms.

Posted by Sue Bursztynski at 11:30 PM

This is a new one for me, Sue. I hadn't heard of an Egyptian Pharaoh who only worshipped one God. Now I'm going to have to delve into the history books to learn more. Obviously, I've never read any of the books you've mentioned!

As an aside, have you watched the new Arthurian (YA I think) Netflix series, Cursed? I've got it bookmarked but haven't got to it yet.

Oh, wow, you haven’t heard of Akhenaten? He was Amenhotep IV, but changed his name when he started his kooky religion. I bet you have heard of Tutankhamen, though? He was family, maybe a little brother of Akhenaten. We’re not sure. They all changed their names back, quick smart, to something with the god Amen in it, after Akhenaten died.

I hope you enjoy discovering him!

I have only heard about Cursed in the last few days, but it’s on Netflix which I don’t have, so it will have to wait for the DVD.

Sounds like an interesting set of books to read! And the new TV show sounds interesting, too :-)

Thanks, Tonel, and looking forward to seeing the TV series when I can get it on DVD.

These days I'm in the mood to start reading horror stories. Already.

Go for it, Guillaume! Any particular preferences?

I'm partial to classic ghost stories. I quite like Lovecraft too.

Believe it or not, I’ve never read Lovecraft, though I can pick up references to him. But you would be surprised which classic authors have written ghost stories. E. Nesbit, the children’s writer, for example. I have a collection of her scary stories. Rudyard Kipling. Arthur Conan Doyle...