A (Writing) Day At A Seaside School!

On Tuesday I went with Ford Street to a school writer’s festival in Mt Eliza, a rather beautiful suburb by the bay. It was a long trip, so I met my friend George Ivanoff  on the way, at a railway station along his route, and he kindly took me there and dropped me off on the way back. Poor George was suffering from a cold caught while presenting at schools in Sydney. He said most of those were air conditioned and that’s what got him. He was, according to him, carrying enough medications to open a pharmacy, just to help him cope with the day.

We all had three sessions, except George, who was doing an extra presentation in the afternoon, but that was really a promotion for his new non fiction book The Australia Survival Guide, after all, even if the kids did enjoy it. 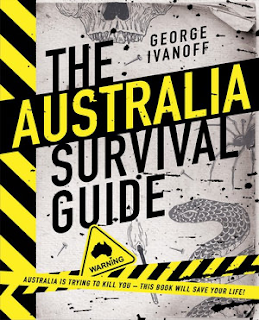 The day was organised by the (teacher?) librarian and I have to say I’m impressed. Checking the web site, I noticed that she does quite a bit outside of the usual checking books in and out. Well, we all do, but she, like me, has to do it all as a challenge, getting the most out of minimum resources, though at least I had a library tech once a week or sometimes twice. She has no help except student volunteers, her library monitors, who do shelving, check out books and help her process them at lunchtime. I’m sure my “nerd pack”, Dylan, Selena, Ryan and Thando would have helped if I asked them but  I had Lucy, my tech, and when there were a lot of books to do for our literacy program I would sit in the library at lunchtime and do them. We managed.

Anyway, she and I talked library shop for a while, which was nice. They have a pleasant library with soft comfy chairs, but it’s rather small, with not many books. There isn’t room for many more anyway. The librarian had had her library monitors do a poster for each of us, with our picture and pictures of our books and any of our books the library had propped up by them. I really should have taken a photo of it.

They had Crime Time, but also an unexpected copy of Starwalkers: Explorers of the unknown, my history of the space program. It doesn’t look much, just a slim volume written for kids, but it was shortlisted for the NSW Premier’s History Award, and when I met my old editor from Allen and Unwin one day, she said she had read it and loved the passion I’d put into it.

After an assembly at which Meredith Costain introduced us with quirky facts and Katherine Canobi’s Mindcull was launched (again!), we got to work. I had a Year 7 and two Year 8 classes. I’m quite comfortable with that level as it’s what I taught, but I had to remind myself that I wasn’t there as their teacher - their teachers were in the room - and it was not for me to discipline them. If a student was doodling instead of paying attention to me, as long as they weren’t disturbing anyone else, I let it go, but it was hard to hold back the teacher stuff after all these years! If they were disturbing others I did ask them to let classmates have their say, but asked it very mildly. They generally did. I did quite happily let the first group investigate the contents of their goody bag before we got started. I would certainly have wanted to do that if I was them.

My workshop this time was on the theme of villains, which Paul and Meredith asked me to do. I was a bit jealous of George, getting to do his on the subject of research, something I can do in my sleep, but I did understand they were trying to sell copies of my book, so I gave what I hope was an interesting session on the notion of fictional villains versus real ones, who were taken from my book. I experimented with different beginnings to the workshop, and may try something else altogether to get them intrigued if I’m asked to do some more next year. That was, of course, the last school visit for this year, as schools will have run out of money and be busy with exams and report writing and last week excursions. But with luck...next year?

I did sell some copies of Wolfborn and Your Cat Could Be A Spy, which was nice, not sure how many copies of Crime Time. Paul offers to sell your books without asking for a cut, which is nice; booksellers at these events usually ask for 45%-50%, so I have to ask full RRP.

We had all three sessions done by lunchtime. We were fed well in the library, with sandwiches and small hot things and fruit, though I avoided the cakes. After lunch, we returned to the hall for another assembly. Kids who had entered a quiz competition got a prize. More kids, keen writers, were taken on stage to do a verbal round robin story, much to their friends’ amusement.

Finally, George went up to present about his new book, with a couple of YouTube book video trailers which he did himself(before he started writing full time, he was a web site designer, so he knows his tech). These included him getting menaced by Bruce, a drop bear with fangs, and snakes. While this was going on, artist Andrew Plant, who, among other things, has done a beautiful book called The Poppy, about the Great War, was busy drawing a Bruce the drop bear, climbing a wall with a scribble of pink meant to be the hair of a certain US President, because he had no orange markers. Then we had a group photo on stage and the day was over. I was asked to sign a bookmark for a book I hadn’t written and then the young man suddenly remembered he had a copy of Crime Time in his goody bag, so I signed that.

A good day in all!

Posted by Sue Bursztynski at 10:27 PM

It sounds like you did have a good day. These writer oriented and bookings events seem like they are both interesting and enlightening.

What a wonderful day, Sue. Kid are so lucky these days to get authors visiting them. Not sure whether it was the time (probably) or the small country town I grew up in, but I don't remember hearing any speak at school.

Hi Brian! They are indeed interesting and get kids interested in at least following up with the books by the authors who have spoken to them. And they add a bit of glamour - “Oh, I got to meet so and so - wow!” Last year I spoke to the kids at my volunteer school during Book Week and every now and then a child asks me, awed, “Are you an author?” or asks if I’m working on a book.

Hi, Anita! I lived in suburban Melbourne and we never got author visits either. An actor, once(Sean Scully, who was an Aussie boy who did a Disney movie) and a singer another time, but no authors. I guess it didn’t help that the library was the size of a classroom.