A new YA science fiction thriller has come out from Melbourne publisher Ford Street Publishing, by debut author K.H(Katherine) Canobi. It’s set in a future in which technology has advanced to the point where virtual reality is as common as today’s mobile phones and internet. In this world, heroine Eila, who has a hugely popular web site, is shortlisted for a job with a major company which has been developing a “skin suit” that enables a VR experience far more advanced than anything currently available; with several other short listed young people, she is invited to the company’s mansion to try them out.

But things are not that simple. Everyone wants a piece of her, from an underground movement to an organisation that want her to do industrial espionage. And within the company itself, some nasty things are going on that might affect Eila... 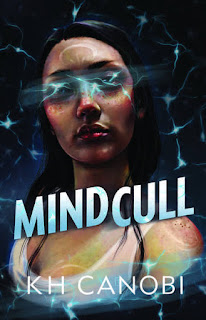 I’m here to tell you, it’s a wonderful, exciting novel! 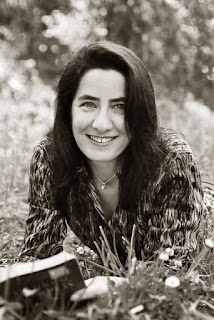 Author Katherine Canobi has kindly agreed to answer a few questions about the book.

GR:  Let’s start with the obvious question: how did you get the idea for this novel?

KC: Through my research in cognitive developmental psychology, I looked at how people change and how they learn from different kinds of experiences. And when I thought about how technological advances like the internet, smartphones and social media have affected our lives, it made me wonder what’s next.

In terms of change, the teenage years are a key time for working out who you are and developing authentic relationships and I think those things are especially hard in the current context of persuasive design, fake news and Snapchat. With further technological advances, it might get even harder

My answers gave my main character, Eila a complicated relationship with technology. On the one hand, she uses it so successfully that she gets shortlisted to star in the global marketing campaign of a tech giant. On the other hand, she gets drawn into a battle against people who are using it in sinister and destructive ways and finds out that even her own mind is not safe. And not everyone is who they seem.

That’s why the tagline of Mindcull is “Who can you trust when nothing is as real as virtual reality?

GR: This novel is full of high technology. What research did you have to do to get it right?

My background as a cognitive scientist gave me a head start in thinking about how scientists of the future might use computer modelling and biological and behavioural measures to try to work out what’s going on inside a person’s head. I also had a framework for imagining what might go wrong if virtual and augmented reality become so much a part of daily life that people’s virtual and real worlds get intertwined.

In terms of the technology itself, I had to find out enough about how it works now to create a believable future world in Mindcull.

GR: How soon, if at all, do you think we might reach the level of technology shown in this book? Even without skin suits?

I did not imagine the story of Mindcull as happening in a far distant time. I was thinking about twenty or thirty years into the future when some things are the same and some things have changed. Much of the technology depicted is already available in some form.

GR: How do you see the world of Eila and her friends? I got the impression, early on, that it was a dystopia, with government poking into everyone’s interactions, but maybe not. There are other indications that it isn’t quite that bad.

I see it as a bit like our world now.  Would someone from the past call it dystopic? Some of the things that we do and some of what is happening to people and our environment now would probably horrify them. Other aspects of our lives might excite them. Our world can still be stunning.

The world of Mindcull is similar. Some things about Eila’s society and environment are chilling. And people use the virtual world to escape real-world problems. She is surrounded by secrets and lies and gets tangled up in a frightening conspiracy. But love and friendship still exist. Outside Eila’s window, birds still sing, and the sunrise takes her breath away.

GR: How closely are the vid clips of your world connected with, say, lifestyle blogging in the present day? Or did you have something else in mind?

Blogging, YouTube clips and social media posts can all be ways of presenting versions of ourselves to the world. We want people to know us and love us but we are scared of revealing too much. We use technology to engage and entertain while trying to keep the less attractive aspects of ourselves private.

In the same way in Mindcull, people post public virtual reality clips to communicate a whole range of things. And Eila’s clips are really popular. She plans them out carefully and they come across as light-hearted and spontaneous even though she is actually very socially anxious. So when people love her clips, it affirms her on one level but she also feels like they don’t really know her.

GR: Do you have a favourite character? Who is it and why?

Lots of people tell me they love Mei, Eila’s best friend. She can be a bit bossy, but she is also funny, warm, clever and passionate and she always seems to get things moving in Mindcull. I really enjoyed writing her because she is an amalgamation of women and girls who have been important at different points in my life. When Mei comes into a scene, she usually makes me smile.

GR: Are you working on something now?

Yes. I am working on a middle-grade magical realism story about a twelve-year-old girl who is catapulted out of her ordinary life on a rural Australian island into a battle between otherworldly foes. I also have some ideas about revisiting the world of Mindcull.

Thanks for visiting The Great Raven, Katherine!

Mindcull comes out officially from Ford Street Publishing on June 1.
Posted by Sue Bursztynski at 8:37 PM

Fascinating interview and the book sounds good. It does seem like we will see these advances developed over the next few decades. These advances will have a profound effect upon our lives. Though I am generally optimistic about it all, I think that there will be negatives and all sorts of issues that we will need to grapple with.

Hi Brian! I agree, there will be negatives as well as positives - we already have plenty of those with our current tech!

Hi Sue
Thanks again for having me on your blog. I just want to let your readers know that they would be most welcome at the launch of Mindcull where I will be talking further about these things with author, Michael Pryor on Thursday the 30th of May in Glen Waverley. Details and registration can be found at https://www.eventbrite.com.au/e/book-launch-mindcull-by-author-k-h-canobi-tickets-60504978018.

Thanks, Katherine! So, any readers who are in Melbourne on that day and missed the previous launch, go along to this one! It’s free.

The concept of virtual and "real" reality being mixed or intertwined is a fascinating one. I love stories that examine the near future implications of that. Because like the author says, we're already almost there. And I like her point about how, in an online world, we present some aspects of ourselves but others we try to keep private.

Sounds like a great read- hope the book does super!

Thanks, Greg, I’m sure Katherine will appreciate that!

Love the plot, although I hope it is just that and we don't see it eventuate ;)

Agreed, AJ. A great novel, but I don’t think I’d like to live in that world either.