Pratchett’s Women: Unauthorised Essays On The Female Characters Of The Discworld by Tansy Rayner Roberts 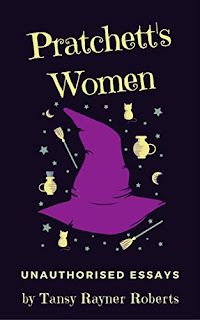 No need to tell you what this is about - it’s all in the title. I bought the original ebook, which, alas, disappeared from my iPad when I bought a new one, as can happen, and was no longer up on iBooks for me to download again, but the good news is that the author updated her book and offered it free for a day on Amazon. I thought the least I could do, since I’d accepted the freebie, was review it.

These essays were originally posted on her web site. She reread - again! - and rewrote the essays.

In case you’re unfamiliar with Discworld, it’s a series of novels set on a world that actually is flat, borne on the backs of four giant elephants which stand on the back of Great A’Tuin, a massive turtle swimming through space, as in some Asian mythologies. The novels begin by poking fun at heroic fantasy and then taking on themes based on our own world. There are digs at racism, religion, opera, newspapers, jingoism, modern vampire fiction, fairy tales and much more. One series features three witches in a tiny mountain kingdom, inspired by the ones from Shakespeare, only much funnier.

The book covers many of Terry Pratchett’s novels, and the female characters in them, from the early books up to Snuff, the last of the City Watch novels - or, really, a Sam Vimes novel, because it’s about how Sam’s wife, Sybil, drags him, kicking and screaming, off on a holiday, away from his job in Ankh Morpork.

Tansy Rayner Roberts first discovered the Discworld novels in her teens and admits that she felt very differently about them then. Some books she hated as a teenager she adores now and characters her teenage self loved, such as Ginger from Moving Pictures, are of less interest now. She feels that Terry Pratchett’s female characters improved vastly as the series went on, as did the series itself.

She covers the witches, Susan Sto Helit, Death’s granddaughter, the female villains, Lady Sybil, the wife of policeman Sam Vimes, Eskarina from Equal Rites, Polly from Monstrous Regiment, werewolf Angua, Sacharissa Cripslock from The Truth, who may be her favourite Prachett heroine - actually, about the only heroine who doesn’t really get a chapter or part of a chapter is Tiffany Aching, although there is a brief mention of that part of the series, but in the context of other characters. That was a bit disappointing, but I suspect there will be another update at some stage and Tiffany will get her chapter.

It was fun to compare Tansy Rayner Roberts’ opinions with my own - and I have to say that, although I have read and reread these books, I didn’t discover them till I was well and truly into adulthood, so she had one up on me there.

Even if you’ve read the earlier edition of this book, it’s worth getting this one, and there is at least one new essay that wasn’t in the earlier book.

You can get it here on Amazon, and if you prefer a print copy, that, too, is available.

Posted by Sue Bursztynski at 2:32 AM

Hi Sue - I've never been able to get into Terry Pratchett ... I expect I'll love it in ten or twenty years time ... seems to be the way with me: late to the party! So glad you enjoy him though ... interesting post - if I see the book - then I'll know to have a look through or perhaps even read. Cheers Hilary

I used to read Terry Pratchett all the time, but they were my brothers books so I didn't get to keep them. As a result I only own one Pratchett book and haven't read the others for decades.

It might be worth taking a trip to your local library, then. Those books are classics!