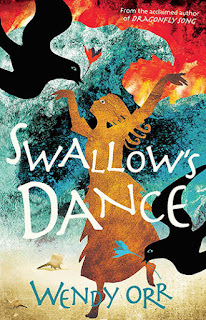 I wonder if the first day of Learning is always like this - do the girls on the hill always feel the ground tremble under their feet?

Leira is about to start her initiation as a priestess when her world is turned upside down. A violent earthquake leaves her home - and her family - in pieces. And the goddess hasn't finished with the island yet.

With her family, Leira flees across the sea to Crete, expecting sanctuary. But a volcanic eruption throws the entire world into darkness. After the resulting tsunami, society descends into chaos; the status and privilege of being noble-born reduced to nothing. With her injured mother and elderly nurse, Leira has only the strength and resourcefulness within herself to find safety.


This is another of Wendy Orr's amazing stories set in ancient Greece. The first one, Dragonfly Song, was about bull dancing in ancient Crete, as seen from the viewpoint of a young girl who has become mute after seeing her foster mother carried off by raiders, and lives as a servant in the hall of her real mother, the Lady(high priestess) before volunteering to go to Crete as a bull dancer. Here's my interview with Wendy Orr about that, when she shows just how much she knows about this subject!


This novel is about the Thera explosion. In case you're unfamiliar with that, it was a huge volcanic explosion on the island of Santorini in about 1610 BCE. You can still go to the island and look into the crater. It erupted with the energy of several hundred atomic bombs. Fortunately, the inhabitants probably got away in time, though their homes were wiped out, so there would have been a lot of refugees. It may have had a major effect on not only Minoan civilization, but others; there are even theories about a connection with the Ten Plagues of Egypt.


There are still some remains, including a wonderful wall painting called "The saffron gatherers".

In her introduction to the book, the author says she was inspired by this painting and I think the girl gathering crocus flowers above is her inspiration for Leira.

Unlike Aissa, heroine of Dragonfly Song, Leira lives happily and comfortably with her aristocratic priestly family until disaster strikes. Before the eruption, there is an earthquake. Her mother is a priestess under the Lady, high priestess of the Goddess, her father is the head of the small island's merchant fleet. She has two older brothers, one married and travelling with their father, the other a diplomat representing the family in Crete. Suddenly, she finds herself having to take responsibility for her mother and her elderly nurse; while her father did manage to get them away, then set off for a trading voyage, the people of Thera are considered unlucky. From wealth and comfort, they are now poor and homeless.

What I like about Leira is that she doesn't complain, she just gets on with  the challenge she has been given, and makes a good fist of it. Some people she meets are dreadful, others kind and compassionate.  Whoever they are, she deals with the life she has been given. And it isn't only Leira. Her father and his sailors spend weeks after the earthquake digging out people and property and looking after other survivors. There is no complaint, just doing what has to be done.

We have no way of knowing exactly how the Minoans lived, but I found this book 's interpretation of the evidence convincing. The young daughters of the priestly class gather crocus flowers and produce the precious saffron as a religious task. The volcano's rumbles are described as the Goddess belching. The culture is shown as a pleasant one, laid-back and comfortable; late in the book, Leira is shocked to see that other cities have, in desperation, resorted to human sacrifice, something that was never a part of her own culture when she was living at home.

I found this an enjoyable trip to ancient Greece, which children from about nine upwards will also enjoy. It has fewer fantasy elements than Dragonfly Song - no snake singing or mental control of animals, just a dream that Leira's father has, which encourages him to take his family and fellow islanders away, and an omen or two, but the few fantastical elements are enough for this story. Like Dragonfly Song, it has large chunks of verse. It took me a while to get used to that in the first book, but I am comfortable with it now.

You can buy it in paperback from Booktopia . I believe Booktopia, an Australian site, ships overseas.

Amazon Australia has it for Kindle, but you will have to wait till October to get it in hardcover from this site, either in Australia or the US. Book Depository has the paperback available now.

Posted by Sue Bursztynski at 7:18 AM

Hi Sue - thanks for mentioning this ... I must find and read a Wendy Orr book ... I remember reading about her - possibly from you! Noted though ... this new work. Thanks - it'd be great to read her approach to that time of life in Greece after the eruption. Cheers Hilary

Hi Hilary! Yes, you discovered her during my A to Z Challenge and said you’d check her out. You should be able to find most of her books, including the Nim’s Island ones and Dragonfly Song, in the children’s section of your library. Swallow’s Dance will be available in your part of the world in October, unless you buy it in Kindle. Otherwise you can ask your library to pre-order it.

Thank you! I'm so glad you liked it. And yes, you've spotted my inspiration for Leira. The more I looked at her face and that little snub nose, the more I became convinced that it was a portrait of a real person, and I felt desperately saddened to think of what must have happened to her and her life in that volcano.

Well, she may have escaped, as Leira did. Even in Pompeii most of the inhabitants escaped. Only about 2000 poor sods were stuck there. I keep thinking about Leira’s maidservant who stayed behind to marry the goatherd...

Some will have escaped. When I planned the book I was relying on the theory that most of the inhabitants left before the final eruption (because no bodies have been discovered yet); however the archaeologist I spoke to onsite at Akrotiri said they're now thinking that 14,000 people were unlikely to have escaped on boats, and they simply haven't found bodies because such a small fraction of the city has been excavated. However long it was between earthquake and eruption, people were actively working on repairs - and when you think about it, people go out to the countryside in an earthquake, not necessarily leave their country. Unfortunately, unlike Pompeii, no one on the island or within a huge radius would have survived the fumes and firestorm - and most depressingly, there's no evidence of large scale immigration on Crete or anywhere else yet discovered. So yes, the poor little maid. It took me quite a while to get over learning this - so horrendous.

Fascinating stuff! I guess the archaeologists will find out more, eventually. They're STILL digging in Pompeii, after moire than a century. So plenty to find out still here...

You know, I haven't read middle-grade books since I was in that age bracket, lol. But this one sounds VERY compelling! I LOVE all of those ancient civilizations! Besides, I like how the author has woven a story inspired by that wall painting. Very imaginative indeed!

In addition to all of the above, the cover of the book is VERY colorful, so it caught my eye right away!

Thanks for featuring this book!! I'll be back for further comments on your other posts, no worries! I know I owe you several return comments. I've gotten behind.... :( And you've been so sweet, commenting on several of my posts. <3 <3 <3

Hope you find and enjoy this one! And while you’re at it, why not check out the previous one, Dragonfly Song? You’ll find my interview with the author on this site, if you’re interested.

Maria, the hardcover listed will be the Canadian & US edition, which will be released in October. I'm not sure why they're showing it now! The paperback is the Australian edition. Hope that helps!

Hi Wendy! It is being offered for pre-order on the US site. You’re right, the release date says October 1.