An Interview With Vikki Wakefield

My guest today is Vikki Wakefield, award-winning Aussie YA novelist whose recent novel Ballad For A Mad Girl I discovered in my goody bag at Reading Matters and reviewed here. I first met Vikki when she visited my school along with authors Adrian Stirling and Tim Pegler, courtesy of the Centre For Youth Literature and Adele Walshe, the head honcho. She had only one novel under her belt at the time, All I Ever Wanted, but she impressed our students no end with her talk and computer images of the drawings she does while thinking about her stories. Every copy of All I Ever Wanted was checked out immediately after the talk! She tells me she hasn't done sketches for this one, but sent me a photo of her "mood board" , which I have posted below. It's nice to know that Vikki is a fellow "pantser" in her writing(a plotter is someone who plans out their story meticulously ahead of time, eg J.K Rowling and my friend Alison Goodman, a pantser does it "by the seat of the pants", eg Vikki and me!)

Without further ado, here is Vikki! 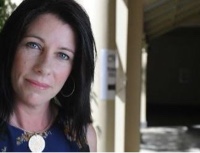 Let's start with an obvious question: where did the idea for Ballad For A Mad Girl come from?

It was a very different book in the beginning and it only started to come together when I found several boxes of old research papers. Many years ago I used to save stories based on urban legendsーI would try to trace more modern incarnations back to their origins to see how stories (passed through generations) had changed. I read through the entire box and got lost in them. That was when I first knew I wanted to include supernatural/horror elements and the story began to evolve from straight contemporary into something else.
Each of your books is different. For example, this one is Australian Gothic, the last one was about some characters who fix up an old drive-in cinema, your first one was humorous ... Will you be trying something different each time, or would you like to do a bit more of the same?

Someone once said most writers tell the same story, over and over, and to some extent I think that's trueーmy books are all similar in tone and underlying themes. On the other hand, they're quite separate from each other, too (in plot, character, language and structure). So, while I do attempt to write a unique book each time, when I'm rewriting there's a centrifugal force that pulls my stories in a similar direction regardless of my intentions. (It's probably a combination of instinct and fascination that makes this happen.) I can only promise I'll write many more YA books, but I never know what they are until they're finishedーthankfully, the YA readership is pretty open to writers who work this way.
You have mentioned in our chats on Twitter that the pipe in this novel was based on a real one not far from where you live - and that you had played on it as a child. Were there ever any "pipe challenges" or was that strictly fiction?

Yes, the pipe is real. There were no pipe challenges (as in time trials) but crossing the stormwater pipe was a rite of passage and it did sort the 'brave' from the 'scaredy cats'. I moved away from the suburb I grew up in but I've since moved backーnow I live very close to the old quarry where I used to play as a kid. When the area was developed the landscape changed dramatically and I assumed the pipe was no longer there. I only re-discovered it recently while I was walking my dog, and it reminded me of the foolish things I did to impress my friends (and enemies). I ended up rewriting the first chapter of Ballad for a Mad Girl to include the pipe crossingーit seemed like the perfect scene to begin a story about overcoming fear.

How much, if any, of this novel is inspired by where you grew up?

I grew up in the outer northern suburbs of Adelaide (the setting of All I Ever Wanted). Swanston and Möbius (from Inbetween Days) are inspired by the country towns I've lived in (places where everyone knows everybody's business and old feuds are generational), and my characters are loosely based on people I knew growing up. I have my setting in mind long before I understand my characters well enough to write about them and, because I write about teens on the verge of adulthood, I find my own teen experiences are the greatest source of inspiration.
Small town life is very different from city life. Do you think any of your characters would ever live somewhere else? (At one point, your heroine, Grace, says that her friend Kenzie is likely to succeed outside)

Kenzie is the most determined to succeed, but Grace is the restless oneーshe's more likely to move on than any of her friends. I think she would chase the original dream. I see her leaving Swanston while the others stay.
This is a murder mystery as much as a supernatural story - did it take a lot of plotting before you got started?

Not so much before I got started (I tend to plan fairly loosely, leaving plenty of room for discovery), but once the first draft was complete it took a while to plug the plot holes I'd created. It meant cutting a few sub-plots and tightening the structure until the threads came together. As someone who doesn't rely heavily on plot, I found it challenging to allow plot to reveal character rather than the other way around. I was also aware there were two distinct reader perspectives in this storyーthat of the believer, and the non-believerーand I wanted to make sure both were validated. It was tough to find that balance; it taught me how to step away from the story and let go of my own convictions.
Actually, what is your writing process - plotter or pantser? Details, please!

I plot in my head (and that can take up to a year of doodling and daydreaming) but once I start writing I make it up as I go. Nothing ever goes to plan. I don't find the essence of a story until I'm well into my second or third draft (I edit as I write, so a draft takes forever), but I've learned to be patient. It comes when it comes. And by essence, I mean the premiseーI think the premise is for the writer, not the reader, because it's the underlying belief that holds the tension in a story.
Grace has some very loyal friends, even though she scares them for a while. Who, if any, is your favourite? (I have to say, I'd like friends like Kenzie and Gummer!)

Gummer is lovely, and he's based on a real person, so he was easy (well, not easy, but true) to write. Kenzie is the friend who does the best she can, but when she falls in love she can't help but give a piece of herself to someone else. Grace doesn't handle that well (and she knows), but she tries to make up for it. She's a difficult friend to haveーGummer and Kenzie are the antidote, but they're both so grounded they were never potential main characters. They wouldn't have such a compelling story to tell.
Is there an Australian book you've read recently that you have wished you had written? (Or just admired)

There are so many I admire! The most recent Australian YA book I wish I'd written is The Stars at Oktober Bend by Glenda Millard. I love all her work, but Alice's voice is particularly enchanting and Glenda's commitment to it is masterful. I also loved The Eye of the Sheep by Sofie Lagunaーanother voice I found utterly compelling from start to finish.
Finally, are you working on anything right now?

I always have two or three projects on the go, whether they're in the daydreaming stages or slowly taking shape on the page. I tend to concentrate on whichever story calls loudestーI'm working solidly on a YA novel from the perspective of a sixteen-year-old boy right now, but I have a middle grade novel in the works too. Aside from writing novels, I recently spent a month working with illustrator Dan McGuiness and a group of SA primary school students on a progressive book. It's called 'The Carisbrooke Creek War' (theme: gender equality) and it'll be published in The Advertiser newspaper during  the last week of July. 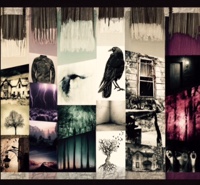 Vikki's mood board
And here's where you can buy it on line! It is also available from Amazon.

Thanks for dropping in on The Great Raven, Vikki!
Posted by Sue Bursztynski at 4:45 PM