An Interview With...Stephanie Herman! "Where Are They Now?" #1

This first interview is with Stephanie Herman, author of "First Strike". I bought that story because it intrigued me. In it, the aliens arrive and they're nice and are made welcome and feted, but... some music can kill. It does. And when you want to stop their families and friends from coming after Earth, you send an orchestra... Sounds humorous, but it isn't. It's chilling. Get ASIM 60 and read it!

And now for the interview! Take it away, Steph! 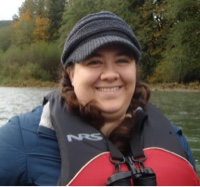 You made your first sale to ASIM. Your story "First Strike" was published in issue 60. What did you have in mind when you wrote it?

I wrote the first draft of this story while I was still in high school, at a time when I was spending nearly every waking hour either at school or in some musical endeavor. While I love playing (I’m an oboist), I didn’t intend to pursue music as my career. Still, I let my involvement grow beyond what was reasonable—I think I played in six or seven ensembles that year, plus private lessons and weekend events. My schedule was so overloaded that at one point I played two back-to-back concerts. So the idea of playing compulsively, of hurting yourself with too much of something beloved, was definitely on my mind.

This was in 2002–2003ish, and at that time it felt like war was everywhere: news reports, debates, protests... My classmates and I were making decisions about our futures, and many were specifically considering or rejecting military service. While I didn’t recognize it at the time, and it certainly isn’t by any means a direct parallel, I can look back and say that climate contributed to elements of this little story: conscription, retribution, and the tragedy of so many lives and resources diverted toward violence. To me, First Strike is really a question about the costs of conflict; and it’s one that was subconsciously very present in my graduating class.

Can you tell us a bit about yourself—day job, where you live, and why you love/write SF/F?

I live in California, and work for the state’s oiled wildlife response program as a care specialist. When there is an oil spill that affects wildlife in the state, I’m on the response team helping to minimize wildlife impacts and rescue the affected animals. When there isn’t an active spill response, I work to make sure we’re ready for the next one; training people, managing supplies, and researching methods to improve the services we offer.

I’ve been writing since I learned to hold a crayon (although I hope I’ve improved since then), but it’s taken on a more important role in my life since I got out of school and started working with hurt and orphaned animals full time. While I get to do a lot of good in my job (and make a bunch of people jealous because of my contact with adorable and amazing animals), it can be quite challenging because it does mean I am reminded of and exposed to the suffering of animals quite frequently. I don’t know if I’d write as much if that weren’t the case.

Writing SF/F means I get to take a break and view the world through a different lens for a while. I don’t view it as escapism—I like to deal with difficult choices, painful emotions, and broken societies in my work, so I’m not escaping. But I am exploring. Externalizing the challenges I care about and making a fictional character or society deal with them lets me step back and reframe things so I can see them more clearly.

Plus, SF/F is fun and in my genes! My dad is a huge SF fan and did a good job inoculating me when I was young. You know you done good when the only doll your daughter loves is a knock-off Star Trek Barbie with a transporter.

Have you had anything else published since then? Or is something of yours about to be published?

I had another story, "The Long, Slow War", published right around the same time as "First Strike", in the September 2014 issue of Bastion Science Fiction Magazine. It’s a story about a human colony caught between two much more powerful alien societies. Although the humans live in uneasy peace, they struggle to hold onto control and self-determination despite their precarious position and dependence on their alien benefactors.

I hope to have more stories out in the near future! But I am more of a novelist than a short story writer, so I’ve done a lot more in that arena. In 2014 and 2015, I was revising and querying a fantasy novel featuring an inventor who falls in with criminals in her attempt to keep her family fed. When the law catches up with her, they give her a choice: double-cross her friends or face exile in the jungle of carnivorous plants surrounding the city. Of course there’s more going on than anyone realizes! Magic! Intrigue! Danger!

That book won me a chance to participate in Pitch Wars, a contest where published and agented writers mentor newer writers and help them pitch their work to agents. Although I didn’t secure representation through the contest, it was very helpful and I did end up signing with Leon Husock of the L. Perkins Agency after about a year of querying. The book Leon signed me for is currently out on submission, so keep your fingers crossed that we find the right editor!

What are you working on right now?

I’m working on a few things at the moment, but I’m most excited about my new book, which is about a girl who follows her exiled brother through a portal to an unknown world in order to bring him back home. Things get complicated because not only is there a whole new world on the other side, the portal also scrambles the memories of anyone who goes through it.
I’m also really thrilled to have joined the ASIM first reader team. It’s a lot of fun to see the work of so many writers, and to give back to the magazine that gave me my own first sale.

Posted by Sue Bursztynski at 5:52 PM