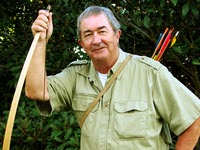 My original plan was to do an "on this day" post, and there have been some interesting events in history on May 22( the Greeks beat the Persians, it was the start of the Wars of the Roses - even if you don't know what those were, I bet you'll know Game Of Thrones, which was inspired by them). And there were some interesting birthdays, such as Laurence Olivier and that awful man Richard Wagner.

But when I went looking for writers, I discovered that the wonderful John Flanagan celebrates his seventieth birthday today!

I remember hearing him talk about his first Ranger's Apprentice novel at a centre for Youth Literature event. Hmm, I thought, sounds interesting, but I didn't check it out for a while after that. 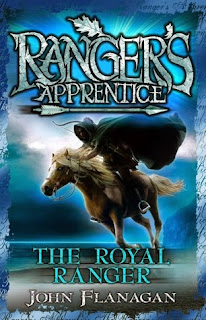 When I finally did get around to it, I was sorry I hadn't read the books earlier.

The Ranger's Apprentice, in case you haven't read these books, is a delightful series set in an alternative Middle Ages. In this world, women can do a lot of things they couldn't do in our world at that time and people drink coffee and tomatoes are around in "Europe".  And a boy called Will, who is small and really not much good at fighting gets a job as an apprentice to Ranger Halt, who is a likeable rogue, who managed to start up a program for breeding ponies for his colleagues in the Rangers by stealing some breeding stock from this world's Mongols.

There is a spinoff series set in Skandia, this world's Viking lands, about a bunch of boys nobody picked in the annual Brotherband trials, but who ended up winning the competition because their leader, Hal, is smart and an inventor.

Raise your mug of coffee to John Flanagan, creator of this delicious universe! And, sorry, Americans, he's ours! An Aussie!
Posted by Sue Bursztynski at 7:08 PM