December 18: On This Day

Time for another meme on this third night of Chanukah...
On This Day In History:
1655: It's decided in England that there's no law preventing the Jews from returning; they were kicked out in 1290 when Edward I and his family had squeezed the last penny out of them, but Oliver Cromwell's government let them back in. Whatever you think of him, that's something he did right.
1719: "Mother Goose's Melodies For Children" first published.
1796: First US newspaper to appear on a Sunday, the Baltimore Monitor. Ah, there's something nice about being able to sit back on the weekend and have a newspaper with breakfast!
1839: First celestial photo taken in the US, of the moon.
1849: Ten years later, William Bond takes the first photo of the moon through a telescope.
1912: Piltdown Man hoax - the "finding" is announced. Now, that must have been a scandal in its time, with that so-called "missing link"!
1958: First voice from space is heard, a prerecorded Christmas message from President Eisenhower.
1966: Discovery of Epimetheus, moon of Saturn
Birthdays:
1879: the artist Paul Klee, who did all those very pretty modern art paintings 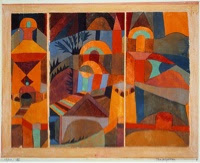 Paul Klee: Tempelgarten. Public domain.
1907: Christopher Fry, British playwright. I once saw his play Ring Around The Moon.
1913 Alfred Bester, SF writer most famous for The Demolished Man. As a tribute to him, the name was given to the head of the Psi Corps in Babylon 5(played by Walter Koenig, who was Chekov in Star Trek, of course)
1939: Michael Moorcock, British SF/F writer. Best known for the Elric stories, but I have only read his novel Behold The Man. Very strange story!
Holidays and Observances
There are a fair few holidays and observances at this time of year, especially in the Christian calendar, but my favourite is the celebration of the Celtic horse goddess Epona, which happened during the Roman Saturnalia.
Some of the bits of Christmas we know well come from the Saturnalia, by the way. The exchange of gifts, for example, and I suspect the Mediaeval Twelfth Night Lord of Misrule must have started with the Saturnalia, when everything was topsy turvey and the slaves got to issue orders and be served dinner by their masters. I don't imagine they took too much advantage of this, since afterwards everything went back to normal...
Posted by Sue Bursztynski at 2:44 AM